Yeah, I wanted a drink after that last episode, too.

This is Person of Interest at its finest, they’re doing an amazing job of ending this great long-form story, and unlike the idiot shoot-’em-up big finishes so many action movies go out with, PoI is doing brilliant shoot-’em-up big finishes based on character, a mix of pain and joy that becomes exhilaration with mourning. This isn’t a “they didn’t have to die” ending. Like Carter, they really did have to die, and I’m just as upset about their deaths as I am about Carter’s (still), even while I recognize that the deaths were real and necessary to the story, and consequential. The Gang is at that point I love in chaos theory: moving from being into becoming. What they were, they will never be again, not just because of their losses but because of Harold Finch who just reached his breaking point. 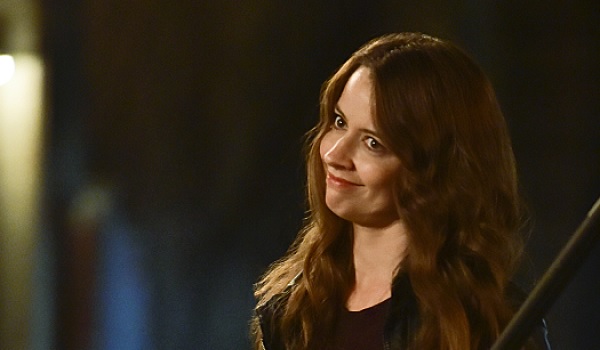 Finch created this story, his story, when he created the Machine, and now he’s going to end it and take Samaritan with him. It’s a fine rousing last stand; the tragedy is that he’s forced to do it on the bodies of two people he loved. Since we loved them, too, the tragedy goes deep. But so does the exhilaration: Finch is going to set the Machine free and go out blazing.

I can’t wait to see what happens next. 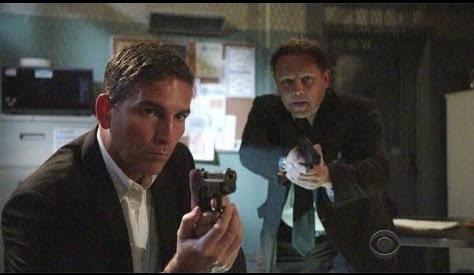 But first, “Sotto Voce” brings back an old adversary and Shaw, but what it really brings home is that the ending of a good story is about character. You can blow up all the buildings you want, do grimdark scenes of gun flare and hurtling bodies, and none of it will matter unless character is on the line.

I’m not sure when in this episode that I recognized the Big Bad, but it wasn’t much after the halfway point when I thought, “Wait. Didn’t I see this on Burn Notice?” And Elias’s first episode. And . . . Okay, so the big reveal was no reveal at all. If all this episode had going for it was finding out who the Voice was, it would have been a miserable failure.

But there was the innocent cabbie Fusco kept after until he transformed in a moment into the ice-cold hitman, acknowledging Fusco’s skill and tenacity.

There was Elias, genially accompanying Finch to keep him from being killed, threatening the bomb maker with a gun nobody doubted he’d fire, taking care of the Bad Guy in a way that audiences have been waiting for (answering the old “Why don’t they just shoot the bastard?” with “Because it’s better to blow him up”). Not to mention Elias’ soft-voiced promise to pay his debt to Finch, which he’s going to do in a big way in the next episode.

There was Reese FINALLY taking Fusco up to the roof away from cameras and telling him about the Machines.

I’ve said before that the last act is when everything is stripped away, but I should have said everything but character. When the protagonist has lost everything she was fighting for, when the time to face that final battle is nigh, all the storyteller has left is character. Nobody cares what size gun the Bad Guy is going to pull, nobody cares who throws what punch, the action is important but only important because of what it shows about character. Who is your protagonist when she has nothing left but herself?

And in the case of PoI, what is the Gang when it’s broken down to just its five members, all of them lethal and all of them damaged? That’s what that last scene in the park in “Sotto Voce” is to me, the grimness of five characters who know they’re the last stand before the apocalypse. But that last scene also tells me that if the apocalypse is coming, I want those five on my side. 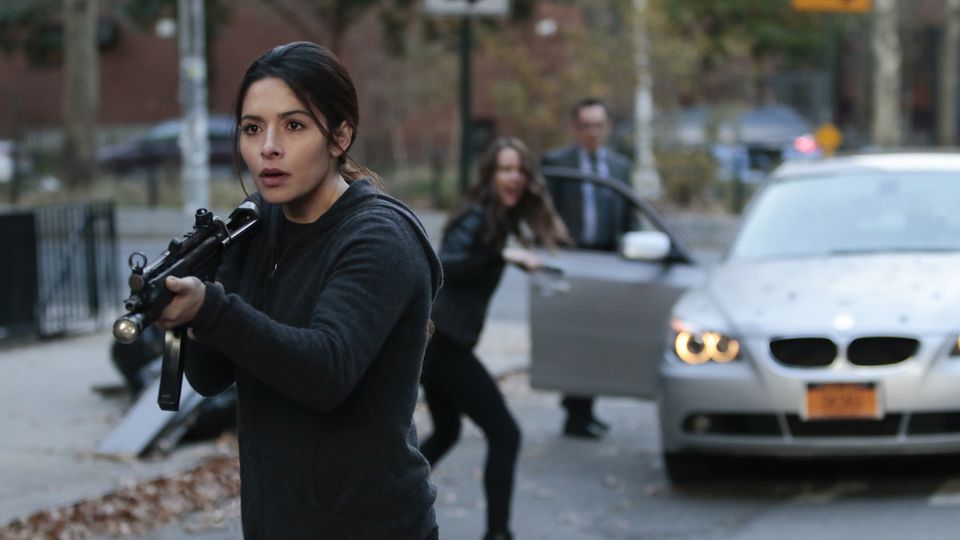 The Day the World Went Away

This was spoiled for me so I knew what was coming (ARGH). Even so, it may be the best episode of this show in its entire run. The stakes are so high–Finch’s cover is blown and Samaritan is everywhere, ruthlessly hunting them to kill everyone BUT Finch because Samaritan thinks it can brainwash him onto its side. Bring a lot of soap, Samaritan, that’s a really big brain you’re trying to warp.

So Finch begins by escaping the safe house with Elias who is now a close friend, watches Elias die defending him; is captured by Greer who tells him that Samaritan doesn’t want to kill him, it wants to enlist him; is retaken by Shaw and Root and escapes with Root who defeats the following Samaritan agents with a really big gun and a scrunchie before she’s shot; is captured by the police who take his finger prints and reveal his criminal past including his warrant from the FBI for treason; defies Samaritan through the interrogation room camera; and answers the phone when the Machine calls him and hears Root’s voice. The joy on his face when he thinks Root is okay is heartbreaking because in the next moment, the Machine identifies herself: “I chose a voice.” And he knows Root is gone.

But so is Finch. Not just because the Machine gets him out of the police station but because the deaths of Elias and Root have broken his resolve to play by his rules, to be the good guy. In a magnificent soliloquy, Michael Emerson shows Finch transforming as he speaks his determination to bring down the computer program that has no boundaries, and it’s clear that means that his Machine is going to be set free. It’s a magnificent scene for a magnificent character, and it sets up the last three episodes–the climax of this season and the climax for the entire series–as a go-for-broke nothing-left-to-lose blow-out, good against evil once again.

Weakest Parts
Really brilliant storytelling all the way through.

Smart Story Moves
• “Sotto Voce”‘s Three parallel storylines, three relationships–Finch/Elias, Reese/Fusco, and Root/Shaw–played out in action followed by direct and crucial dialogue, people in a crucible telling each other what they need to know.
• Paying off audience anticipation in scenes we’ve been wanting for a long time: Finch and Elias as no-longer-dueling masterminds working together as quiet-spoken badasses, Reese finally telling Fusco the truth, and the brilliantly done Root/Shaw reunion. It’s a cliche to say that I’d watch a show that was nothing but these people chatting at a picnic, but it’s true: I care about the relationships in this show so much more than I do about the threat of world-domination by an AI, and the only reason I care about that is because the AI is trying to kill Our Gang.
• Setting up the deaths by having Elias talk about where he thought he’d end up (the same place Finch thinks he’ll end up: prison), and by having Root talk about how there are deaths because we’re all just shapes, and the Machine knows the shapes of all of them. When she says that Carter is still alive in the Machine, my heart broke just a little.
* Giving Elias and Root such good deaths, Elias going out on his feet, protecting Finch to the end and Root with that incredible last car chase, steering with her boot while blowing up the Samaritan armored car with a Great Big Gun. If you’re going to kill off characters we love this much, make their deaths magnificent.
• The Machine taking Root’s voice. That’s going to have major emotional reverberations but I all I could think of was, “She’s still alive in the Machine,” just the way she said she’d be.

Favorite Moments
• Bad Guy:”Careful, compassion and loyalty make people weak, easy to exploit.”
Elias: “Well that’s some stinkin’ thinkin’, and why you’re going to lose.”
• The moment in “Sotto Voce” in the park at the end. It’s been awhile since I’ve actually gotten chills watching a story, but seeing Finch back in the park and then Reese and Fusco walking toward him . . . that was a moment.
• The guy from the neighborhood telling Reese how much Elias was loved. I didn’t know I needed to hear that until he said it.
• Root and the scrunchie: Details matter.

You know there’s a lot more in there that I loved, but I’m still overwhelmed, so I’ll come back later and rave in the comments. But really, this is magnificent storytelling, magnificent characterization. PoI‘s world is more violent than it’s ever been, but that violence is in service to story, not the other way around, and every gunshot is important because of the characters involved. It seems odd to say about a story so fun of guns and squealing tires, but this episode is about character, as is the entire series. Character is the reason the gunshots matter.

Here’s part of Finch’s monologue in the holding room:

So now I have to decide. Decide whether to let my friends die, to let hope die, to let the world be ground under your heel all because I play by my rules. But I’m trying to decide. I’m going to kill you. But I need to decide how far I’m willing to go. How many of my own rules I am willing to break … to get it done.

New PoI Post
Only three more episodes to go, and only one weekly from now on, which is probably a good thing because the impact of these is immense, so stretching them out will help immensely. On the other hand, I can’t wait to see what happens next.

Also, I hate CBS. Canceling both PoI and Limitless? The entire network is dead to me now.

18 thoughts on “Person of Interest: “Sotto Voce,” “The Day the World Went Away,” and the Impact of Character”