So it’s 9 PM on Tuesday, and I’m setting myself up here, talking about “.exe” as the last episode plays (I won’t see it until about four AM), but I’ve been thinking a lot about this since Sarah posted how unhappy she was with the “.exe” episode. I loved it. And I think it comes down to expectation at the climax.

Your story lives or dies by the climax; it’s the last thing people read and the last thing they’ll remember. Think how many times you read a book or saw a movie that was fairly meh until the climax, which was fantastic. Would you give that author another try?

Then think about a book or movie that was fantastic . . . until the climax, which was a huge letdown. Would you give that author another try?

A great climax can save a meh book but nothing can save a bad climax. And the evaluation of a climax rests almost entirely on expectation. If we’ve been watching a protagonist battle an antagonist throughout a story, that story better end with the obligatory scene where the protagonist and antagonist fight to the finish. If we’ve been watching a protagonist battle an inner demon, that final climax better end in either victory over or capitulation to the demon. Whatever the reader/viewer has been led to expect in the climax is the gauge by which that climax will be evaluated. The way it’s executed can be a surprise, but the climax itself must fulfill the story that’s been told.

Which is why it’s so important to make sure you’re communicating the story you want told.

Sarah wrote about how anti-climactic Greer’s death was:

“They killed the tension. Greer’s death was ridiculous. The only good moment was when Fusco got the better of the Samaritan operative. But having him be the murderer of all those people? Please. How did they turn stupid in their last few episodes? Because I was willing to let last week’s episode have points for fun, but it’s like they ended the season the week before.”

Sarah’s watching a different story than I am. I understand why, I think the writers may have been too subtle on this, but Greer was never the antagonist. Greer’s a minion and he has been from the beginning when he booted up Samaritan and said, “You tell us what to do.” There have been any number of times when Greer suggested something to his machine and was told no and Greer obeyed. Greer, in short, was underbrush that needed to be cleared before the climax, just as Elias was underbrush. Great characters, but characters who would be loose ends at the end. His death wasn’t ridiculous to me, it was chilling because it showed just how dangerous and ruthless the real antagonist, Samaritan, is: it killed its most loyal servant to further its own ends.

In contrast, Finch spends the penultimate episode in Gethsemane with his child, explaining why She has to die. She shows him all the good he’s done, but She’s not arguing with him. She knows She’s going to die and this is Her last chance to reach him; it’s the quiet before the storm, the night before the battle, and attention must be paid.

So Reese and Shaw fight to save Finch, and Fusco fights to defeat the Machine, and in the dark, Finch loads the virus and then makes his way to Samaritan to end it all, accompanied by his Machine for every station of the journey, both fully understanding the sacrifice they’re about to make for humanity. Root says over and over again, “You created God, Harold,” but it’s left unspoken that if Finch created a savior for humanity, then he’s God, too, giving his only child to die for humankind. “I wish there was another way,” Finch says to Her at the end. “I’m sorry.”

And that for me was incredibly powerful, necessary for the weight it gives to whatever comes next since what comes next is the last of the story.

I really loved this episode, but I loved it because it fulfilled and then surpassed my expectations.

Here’s the stuff I wrote before I read Sarah’s comment:

The Machine Gang Lite set-up from last week kept nagging at me, so I went back and watched “One Percent,” the very good episode that introduced Logan Pierce, aka Finch Lite, the genius tech billionaire, which Reese lampshades at one point in the season two episode by describing him pointedly to Finch as “a cunning billionaire with unlimited resources.” At the end of the episode, Pierce gives Reese a million dollar watch as a thank-you for saving his life. Reese shows it to Finch, who stomps on it and breaks it, showing him the GPS planted inside, while the Machine flashes a box on the screen that says “Monitoring Resource: Logan Pierce.”

They were setting last week’s episode up in season two, which boggles my mind. 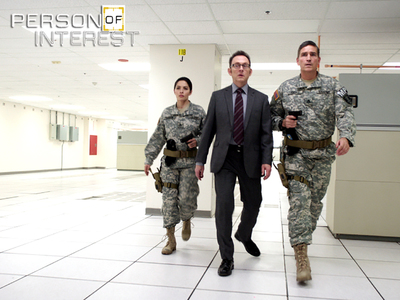 This episode boggled, too. Beautifully paced, full of action with consequence and conversations between two people that were as riveting as the action. You know a show is doing something right when the phone rings and you get chills. Twice. And then a double cliffhanger ending.

I wrote earlier in this series about how the last act is paring the story down to its essential elements; everything else falls away as the story comes to the end, resting on the one point that everything that comes before has been aimed at. The opening of the episode is just Finch in front of two computer screens, blackness around him. He has no context; it’s just him and the Machine with Root’s voice. He’s cut off from the Gang, about to do something devastating, and taking full responsibility for it.

Reese and Shaw are together, but the shadow of what they’ve lost is in every shot because it’s just the two of them, carrying the memory of those they’ve loved, now as isolated and alone as Finch and the Machine. They trust each other, they work together, but they’re all too aware they’re the remnants of something that was amazing.

And then there’s Fusco, completely alone as the Samaritan agent zeroes in on him, fighting a duel without his partner because Reese is searching for Finch.

All of these people are in .exe mode, if you will; that is they go into action as soon as the show boots up, running automatically to do what they’re programmed to do: save the world. Their stories are as cold and hopeless as anything this show has ever done, and it’s riveting. 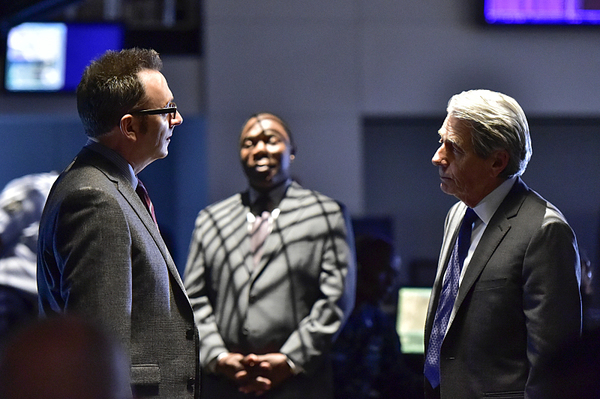 Weakest Parts
• Not in this episode, but way back in the beginning, the flash forward that has the Machine saying that she doesn’t know if anybody made it. So we know the Machine makes it. Flash forwards are worse than flashbacks because they don’t just interrupt the now of the story, they’re always either spoilers or schmuckbait or both.

• You’re expecting me to bitch about flashbacks, aren’t you? Wrong.
Those weren’t flashbacks, they were memories and alternate histories and they were always in the now of the story as the Machine tried to give Finch what he needed to know. They were dark Christmas Carols, showing him that his choice to build the Machine was both a good and bad one–Reese saved Jessica but then killed himself; Shaw still had her partner Cole but she killed the innocent whistleblower and Cole’s hesitation probably means he died shortly, too; and Root was never redeemed and ended up working for Samaritan as Martine’s doppelganger. Most devastating, Carter doesn’t die, but Fusco is disgraced and ruined. There are no simple answers, there is no right or wrong, and Finch is left to make his final decision to kill Samaritan and the Machine with it, or protect his AI child and leave the world in the hands of The Greater Good AI.

Smart Story Moves
• Starting with Finch in the dark with only the Machine’s voice, that echo of Gethsemane.
• The alternate histories that show how deeply the Machine and Finch have thought things through.
• Tightening the noose around Fusco. We WORRY about Fusco. Also, echoing his scenes in the pilot with Reese; he’s come a long way.
• Greer as calm, insane, implacable evil, underscored by Finch’s “You’ve gone mad.”
• The subtle Christ allusions, i.e. Greer telling Finch, “You don’t want to murder your creation. The one you resurrected from the dead.”
• Keeping most of this so quiet. It’s just beautifully done.

Favorite Moments
• Shaw’s “You think of anything else give me a call” and then the phone rings. Chills.
• Reese’s claustrophobia: “Just remember what happened to that fat German kid in Willy Wonka.”
• Bringing Finch and Greer face to face: Protagonist and Minion in a Pre-Obligatory Scene.
• Greer revealing how batshit he’s become: “Samaritan was distraught . . .” and “We’re dragging humanity to a higher plane …” for the Greater Good (three words that should always bring a chill, and beyond that always remind me of Hot Fuzz).
• The Machine calling Reese “the big lug.”
• Anything with Finch. Finch is just amazing. Finch is a BADASS.

Ominous Moment
Finch executing the program and presumably Samaritan and the Machine at the same time, while Fusco has to decide whether to execute the Samaritan agent (yes, for heaven’s sake, yes, do it; Carter shot the Russian guy, you can kill this bastard).

5 thoughts on “Person of Interest: “.exe,” Expectation, and the Calm Before the Climax”