The last act of a story has to be lean and mean. The story’s first three acts (or two or four or whatever) have burned away everything but this final push, our protagonist is in the crucible, and there’s only one real mandate: Fight Back.

In a hundred-thousand-word book, my last acts are usually around 15K sometimes less. That’s seven, eight, maybe ten scenes, tops, for my protagonist to pick herself up, get to the antagonist, and end the damn thing one way or another. This isn’t just for pacing purposes, this is for the reader/viewer, too. She’s waited a long time for this, so I don’t stop for anything else isn’t directly related to getting to that climax. This is the top of the roller coaster; don’t slow down on the final drop. 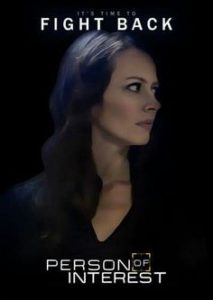 So PoI has burned off five of its episodes putting the Gang back together, reconstituting the Machine, and showing Shaw fighting her own battles. The three episodes that aired this week were textbook examples in (1) how not to tell a story in the last act, (2) a pretty good way to work the middle of the last act, and (3) how to do it absolutely right.

Reese, Finch, and Root go to a wedding, which I suppose had potential but since all the juice in the story is Shaw going through a new simulation and Fusco on the trail of Samaritan’s missing people, the whole horse-drugging, ex-girlfriend bribing, assassin-coming-for-the-photographer-at-the-behest-of-the-least-likely-suspect is weak sauce because it has nothing to do with Samaritan. Even Root playing a caterer on a horse falls flat, as does Finch’s bizarre wedding song. The entire wedding plot is PoI treading water badly until the final reveals, which are stunning. 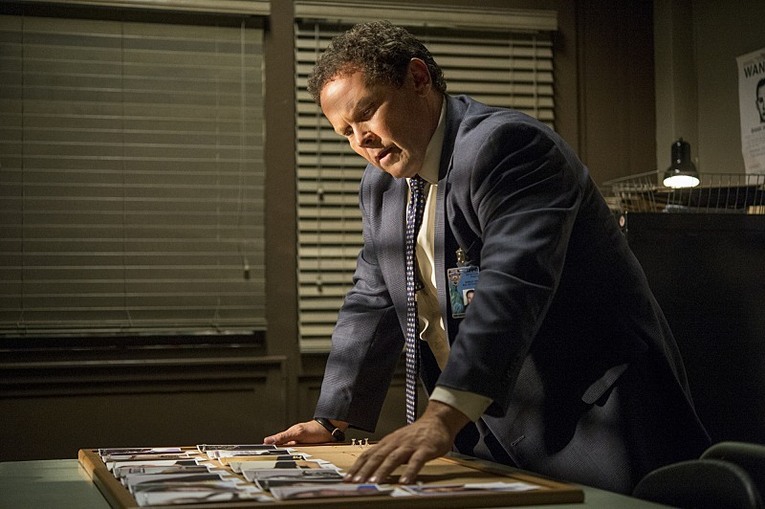 The real MVP here is Fusco, no longer the bumbling cop of compromised morals but a serious, skilled, focused detective determined to do his job. I would pause to admire this incredible character arc (and Kevin Chapman for embodying this character so thoroughly) but Fusco’s on the move, discovering the tunnel where Samaritan has been dumping the people it’s disappeared (a really clunky way to dispose of bodies), efficient and implacable and putting himself directly on the Machine’s radar because the damn Gang still won’t tell him what’s going on. Of the many tropes I hate, the “Don’t Tell X the Central Secret of the Story” is right up in the Top Ten. It’s not keeping Fusco safe to keep the Machine from him, it’s putting him in more danger, and he is understandably a little pissed about that.

Which I think is where the “More Perfect Union” title is going: the Gang is back but its perfect union is fragmenting. Root isn’t going to wait anymore to find Shaw, Fusco isn’t going to follow mysterious directions anymore, and the Machine is starting to assert its independence. Finch and Reese are still bonded, and probably will be until the bitter end, but it’s starting to look like every Gang Member for him or herself.

Also, Shaw is still going through hell, and I hate that kid. 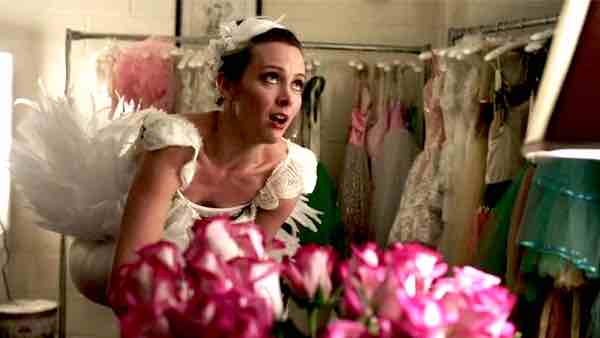 “QSO” is the code for a contact between radio stations, sometimes just a signal, and of course that’s what Root does in the radio station as she tries to protect conspiracy nut/DJ Max, who discovers Samaritan’s code in his radio static. It’s not all tin foil hats; sometimes, as Max discovers, they really are out there.

“QSO” is a MUCH better episode: it starts in action and stays in action, in direct conflict with Samaritan, the number of the week directly in the path of the Evil AI. Or is it? Greer’s definitely trying to convince Shaw that Samaritan is at most a Necessary Evil, killing to prevent worse outcomes. BY this time, Shaw is into the seven thousands in simulations, and how she can tell real from simulated at this point is a problem. Hell, how WE can tell the real from the simulated is a problem, which is excellent because it puts us firmly in Shaw’s head.

Meanwhile back at the ranch, Root is a ballerina to save a Russian who immediately proposes, a historical re-enactment player churning butter in a mobcap to steal an EMP device, and a conspiracy nut/radio station producer to protect the new number, a nice guy named Max who’s discovered this weird code in his static . . . which is unfortunate for Max because it’s Samaritan’s code.

That leads to two interesting things: The Machine through Root explains to Max that as long as he lies/stays quiet about the code, he’ll be safe; Max is compelled to tell the truth, and Samaritan kills him. When Finch yells at the Machine for not saving Max, the Machine points out that Max had free will, which is pretty much the foundation of freedom. Free people get to choose, even if their choices are dumb. Samaritan rides roughshod over free will, citing the Greater Good; the Machine honors free will which gives it the boundaries that Samaritan does not have. Finch’s insistence on overriding Max’s free will to save his life and the Machine’s refusal to violate free will is the crux of the Machine/Samaritan conflict, leading to the conclusion that Finch is wrong, another crack in the edifice that is the Machine Gang.

Which brings us to the other interesting thing: Root tells the Machine that she must find Shaw now, and the Machine essentially hooks her up with Samaritan, leading her to the printer that is the Samaritan’s source of transmitting code in the radio station. Root speaks directly to the Machine, promising to go quietly if she will be taken to the place where Shaw is being held. Reese comes in and rescues her, but the connection is established and in the final shot, Root’s in the Machine’s yellow square, talking to her enamored Russian and looking at Russian missiles, having gotten a message through to Shaw. (I read somewhere that the Machine and Root planned Shaw’s escape, but all I saw was Root sending “4 Alarm Fire” (the way Shaw had described their potential romance before “a 4 alarm fire in an oil refinery”) as code for “I’m coming for you.”)

All of which means that no moment of this episode is wasted. Even with a compelling number of the week; the Gang is rushing headlong into its final conflict, which is exactly what it should be doing. 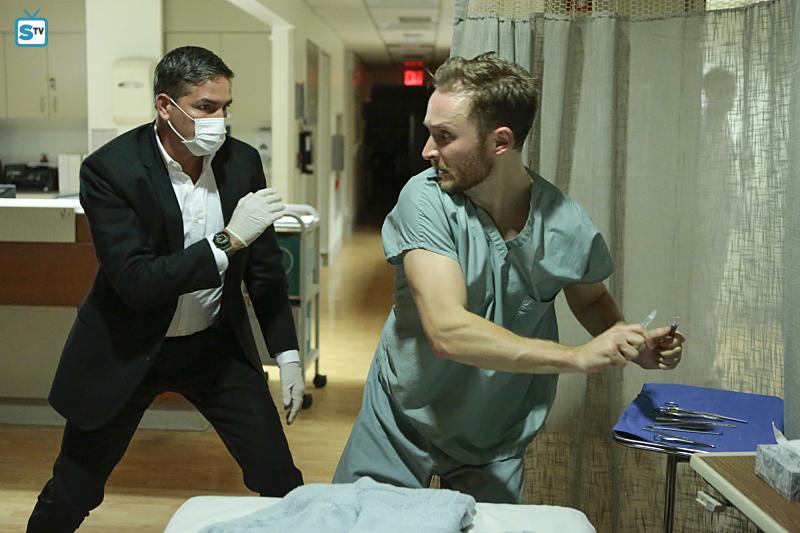 And then there’s this episode which is not only full of action, it’s full of everybody changing lanes: Root working on her own with her infatuated Russian, Fusco asking for and getting a transfer, and Shaw putting one in the center mass of the Machine Minion as she goes out the door to freedom, a changed woman.

But in the beginning, it’s back to work: There’s a sickly number heading for ER, the Machine is still losing all its simulations against Samaritan, and Root really wants Finch to set the Machine free. Samaritan’s Reese (hereafter known as Jeff) has a bad lunch with an old girlfriend, Fusco goes to Elias to find out about the bodies, Shaw breaks out of a South African prison, the number dies from something horrible, and Jeff is asking questions which Samaritan will not like. We’re a third of the way through the episode and things haven’t stopped.

And yet they’re still fighting rearguard actions. Only Fusco is attacking Samaritan, and he doesn’t even know he’s doing it.

But back to the number: He’s dead and now Reese and Finch are trapped in the ER with a virus and Samaritan’s Jeff on his way to the ER with two vials of tainted blood because the dead number is a Samaritan victim. I’d go on, but the bottom line is: The episode moves the way a fourth act beat should move: fast and full of consequence, propelling the protagonists toward that final showdown.

But the real kicker here is the emotion the episode evokes: the Samaritan-deluded admin who destroys the anti-viral vials for the Greater Good, the son-of-a-bitch Greer minion who plays chess with Shaw’s mind and loses, the nice guy in the prison refusing to leave his friends, the good cop in the ER, the bitch-minion who blackmails Jeff into staying with Samaritan, the thrill of Shaw’s escape made real by the announcement of the virus on the radio that she could not have known about, Fusco leaving the gang and the precinct and telling Reese he doesn’t want a partner who won’t tell him the truth, and above all, Elias and Finch fighting over full disclosure. Finch won’t read in anybody else to the truth of the struggle, but as Elias points out, he needs them all. Cutting Elias and Fusco out of loop weakens the Gang and strengthens Samaritan. Since Root is arguing the same thing about the Machine, Finch is beset on all sides, and Elias’s final words to him are quiet but ominous.

Ominous Moment
Elias: “You know what your problem is, Harold? Underneath all the intellect you’re the darkest of all of us . . . I just hope I’m not around the day that pot finally boils over.” 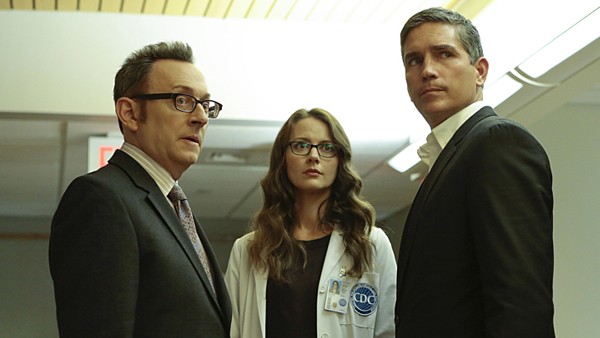 New PoI Post
Two more next week and then three weeks with just one episode–SO much easier to talk about just one–and then PoI is done, which is a damn shame, especially with so much dreck out there now. And then they canceled “Limitless” which I loved, damn it. Not to mention the already axed Galavant and Agent Carter. Idiots. They’re all idiots.

17 thoughts on “Person of Interest: “A More Perfect Union,” “QSO,” and “Reassortment””