So the first move after the crisis is the reset: the protagonist picks herself up and charges back into the fray, changed irrevocably from where she began and now determined to bring down the antagonist and achieve her goal or die trying. (Since this is Person of Interest, “die trying” is not an exaggeration.) And the first three episodes of Season Five did this: the five remaining Gang members (I’m counting Bear) are relatively safe back in their undiscovered subway lair (or in Fusco’s case, the police station), the Machine is relatively back to normal (big asterisk on that one), and the numbers are coming again. So this is the time for the Gang to move from recovery to assault; this is the last act and it has to move swiftly. And with “6741” and “ShotSeeker,” it does. 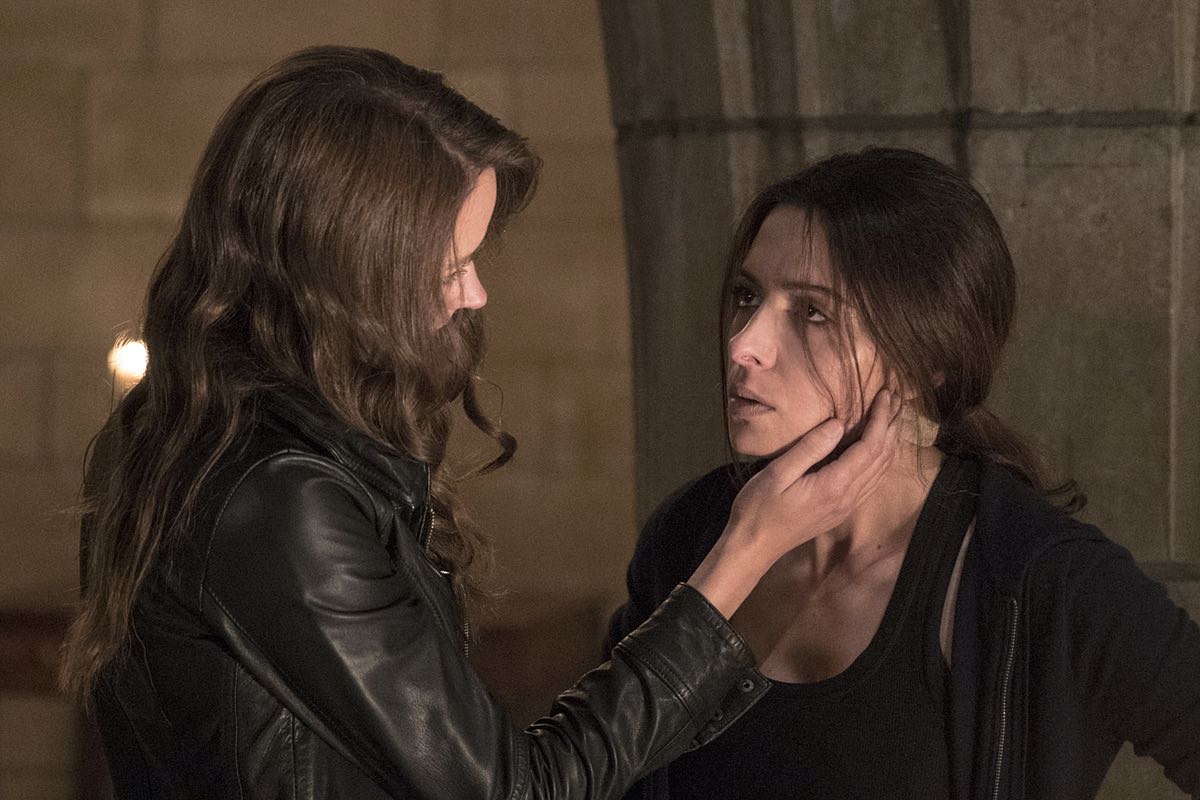 The opening is Shaw getting chipped by Samaritan, with a lot of As You Know dialogue, but that’s so much better than flashbacks, I’m okay with it. She’s still a bad ass, but she’s up against huge forces. So when she escapes, you have to wonder, is this part of Samaritan’s plan? I vote yes; that boat is just too damn convenient. Love Shaw’s “I’m towing bad news behind me.” You’re not paranoid if a giant AI really is out to get you. And Shaw unchipping herself is as badass as we expect, especially when the AI fights back. Also loving killing Bobby Jackson.

All right, I just love Shaw.

And bam she makes the action happen. This episode moves. They capture Greer, they find a USB drive that they think is Samaritan’s kill switch, and then Shaw becomes a time bomb they can’t desert while Greer plays mind games to his detriment. The paranoia here is excellent because even Shaw doesn’t know if she’s a traitor. But then Reese dies and all the other slightly-wrong things start to add up–Finch is too robotic, Reese would never turn his back on Shaw, Greer is captured too easily, there’s no reason to put a kill program in Greer’s arm–and I realized it was all in Shaw’s head. That’s the problem with Gotchas, I thought . . . and then it wasn’t a Gotcha, it wasn’t Shaw hallucinating or dreaming. It was story, in this case, a vicious simulation, the six thousand-seven-hundred-forty-first that Samaritan has put Shaw through since she was captured. And the stakes skyrocketed when I thought they couldn’t get any higher, and I was outraged and . . . this is one of the best episodes this show has ever done.

They better get in there and rescue Shaw, that’s all I’ve got to say. (Anybody else get a callback to “Awakening” in Angel, Season Four?)

Smart Story Moves
• Casting Sarah Shahi.
• The chip in Shaw’s brain is an outstanding way to weaken a superhero. Plus bringing Shaw back into the fold even though she’s possibly a Trojan Horse, and making her hostile. And hot for Root, which was overdue. And finding a natural Faraday cage and another great lair. But mostly, moving the episode at the speed of light, every move fraught with meaning and danger.
• And then making it all a simulation, the 6741st attack on Shaw’s brain, which made it even more devastating. There wasn’t a wrong move in all of “6741.”
• Most interesting thing from a story wonk point of view: Knowing that everything in the episode was part of a simulation doesn’t make any of the details less important or compelling because they’re Shaw’s details from Shaw’s memory; what they want her to do is Samaritan-directed but her interactions with the Gang are not. For example, she never betrays the subway, even though she doesn’t consciously realize it’s a simulation.
• Best evidence that this is superb story-telling: It’s even better when you watch it the second time.

Favorite Moments
• Bear being so excited to see Shaw, and “Stay here with me,” even if it did turn out to be a simulation. Just knowing that those were the things Shaw clung to was devastating. 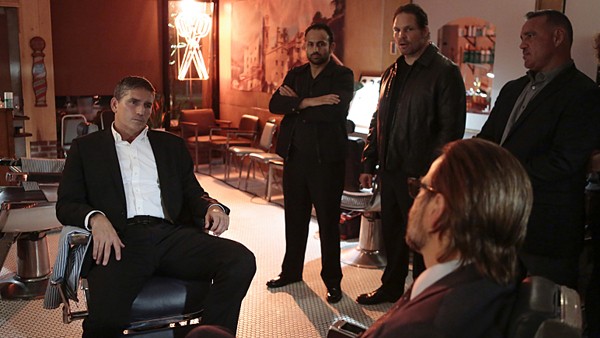 And then there’s another number of the week episode but this one is integrated into the bringing-down-Samaritan plot with a victim who is not only skilled but willing to rush into danger to save somebody he admires, all of which means that it moves fast and we care. There’s so much in this one–the ShotSeeker program, Garvin’s exceptional ear, Samaritan’s new recruit who has no idea he’s working for evil, Fusco’s passionate desire to find Reese, Reese’s passionate desire to protect Fusco, Elias’s foster brother entering to gum up the works, the Machine running simulations against Samaritan ten billion times and losing every time–that it just zings. And then the bonus at the end that Elias is still with us. He may be a murderous mob boss, but he’s our murderous mob boss.

The thing that really struck me about this episode is how much it leaves unsaid but still clear, including the fact that Samaritan not only has eyes everywhere, it now has ears, too, thanks to ShotSeeker. And the big unspoken reveal is that Samaritan has now elevated protecting itself above protecting the Greater Good. That is, in the past, it’s executed people like Dominic and Elias because they were disruptions to normal life. But Garvin is not a disruption, he’s important to preserving the peace, his work with ShotSeeker is a huge benefit to the police force. And yet Samaritan moves to eliminate him because he’s investigating a disappearance that Samaritan is responsible for. Samaritan had decided that the Greater Good means protecting itself at all costs.

And then there’s the Little Machine that Could, running ten billion simulations and losing everyone but learning an immense amount about Samaritan as it loses. When Root tells Finch to give her defenses, and Finch says that the Machine is smarter than he is and it must design its own defenses, it’s a dead giveaway that the Machine is doing exactly that.

Smart Story Moves
• Tying everything in this multi-thread story back to Samaritan.
• Using all the story moves to bond the Gang even more.
• Releasing the food program to scientific journals but leaving open whether the results will be good or bad, reinforcing that nothing the Machine Gang does is ever simple anymore.
• Using that annoying “Don’t tell Fusco” plotline to put Fusco in danger as Samaritan logs him as a potential threat.

Ominous Moment
• ShotSeeker is listening . . . to everything.