Previously on Person of Interest:
“The Perfect Mark” is one of those everybody’s-crooked con stories that was probably pretty good, but by this point, the HR story is so compelling that it just got in the way of the good stuff, culminating in the shootout in which Lasky dies, Carter shoots his killer, and gets the dying crooked cop to point out the head of HR: Quinn. Best part of the entire episode: That fistbump between Reese and Carter in the car. It’s a beautiful thing. 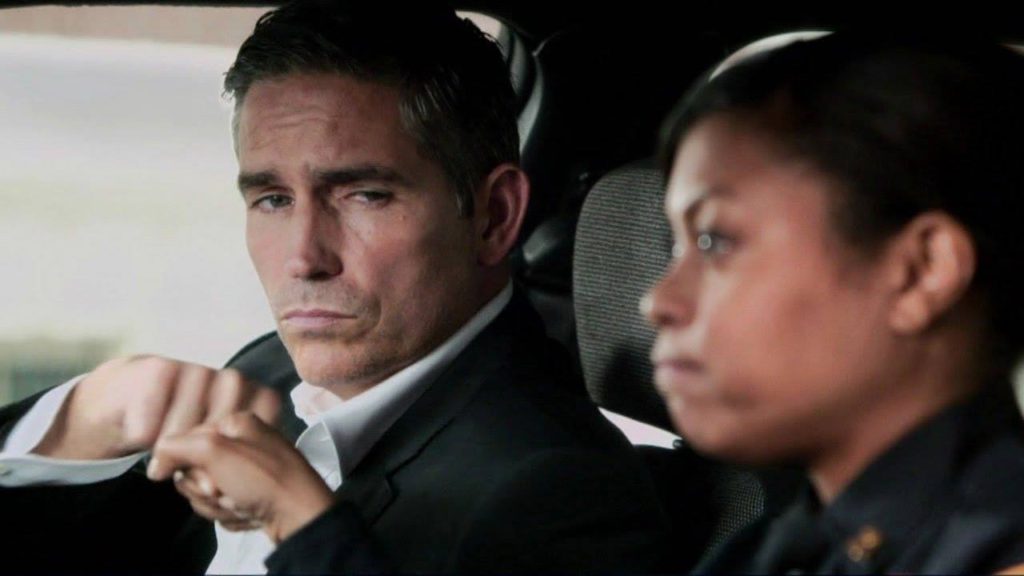 “Endgame:” Great story-telling as Carter works the Russians, HR, and the FBI like puppets, ending in the home of a judge she’s gone to for a warrant for Quinn’s arrest. The judge is HR, Carter’s surrounded by cops, and then she drops her last bombshell– she’s recorded everything–just as Reese comes through with back-up, paying off that fist bump.

About this time the producers and showrunners were warning that somebody was going to die in the next episode and showing pictures of a bloodied and beaten Fusco. So I did a blog post on the most effective person to kill, narratively speaking: “Killing Characters, aka Please Don’t Kill Carter.” It’s interesting to read that now because, even as I analyzed it and came to the conclusion that the best possible narrative choice was killing Carter, I desperately wanted them to make a weaker choice. I loved Carter so, she was the woman I wished I could be, the woman I’d want to write about, and she just did not deserve to die, damn it.

“The Crossing” Carter brings down HR and that rat bastard Simmons shoots her and Reese at the end of the episode. Reese is critically wounded, but Carter dies in his arms. God damn it. I still can’t watch this episode again, even though it’s an outstanding one. I just can’t stand to see her fight the good fight so ferociously and then get taken down in the end. It’s just too damn painful. Even so, I remember stand-out moments: Fusco refusing to give in to torture, the phone call from Shaw that she’s saved his son but can’t save him, the way he weeps as he thanks her and then turns on his captors, the moment in the morgue when Reese is about to sacrifice himself to save Carter and kisses her good-bye, the sheer intensity of these people as they risk everything to bring down evil . . . it’s a stellar, stellar hour of story. And then they break my heart.

Which may be why I keep watching “The Devil’s Share” over and over: I can grieve with the rest of the Gang as they reel from the shock and try to deal with the aftermath. It’s an aftermath that will stretch throughout the rest of the run of the show, they never forget Carter, but the immediate aftermath of grief and loss and vengeance is distilled down into forty-five minutes of brilliant emotional narrative. 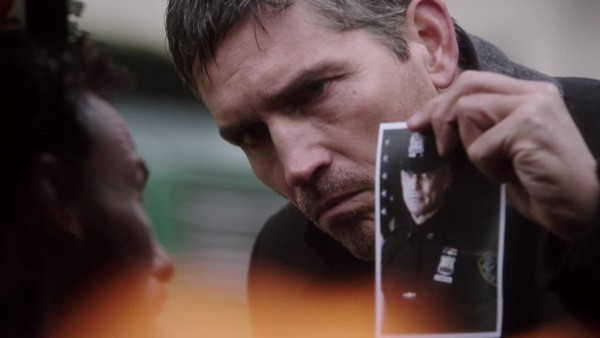 So how does this story so perfectly capture grief?

• It begins with the loss of somebody that not only the characters loved, but the reader/viewer loved. The characters then become our surrogates, giving us catharsis through their grief and vengeance. Beyond that, they keep us from mourning alone, bringing us into their devastated community.
• The opening montage of wordless action captures that numb feeling that hits after loss, the sense that you’re underwater, and nothing is real, everything silent and in slow motion. I don’t like montages, but this one is perfect because it creates in the viewer/reader that deadened sense of horror.
• The visuals in the montage–Carter’s funeral, Shaw’s stony face, Finch and Fusco devastated, Reese getting out of the hospital bed, the violence as Reese goes for vengeance–all summed up in a series of pictures. The aftermath of loss is so full of banal detail, and this story elides right through all of that to get the central narrative of bringing down Simmons and saving Reese. To quote another great narrative, attention must be paid. I’ve seen this episode at least a dozen times, and I weep for Carter and those she left behind every damn time I watch this montage, which is what this kind of narrative is supposed to do: evoke cathartic emotion.
• The use of grief to bond a new team together to save Reese, bringing Root into the fold as the one person who’s not consumed with vengeance, giving them all a sympathetic foil.
• The focus on the individual characters and what Carter’s death has done to them, especially Reese, and even more especially Fusco. When he stands over Simmons and refuses to kill him because of Carter, he gives her a perfect eulogy and the promise that the impact she’s made on the world of the show will not die with her. I weep during that one every time, too.
• The final vengeance against Simmons can’t be delivered by any of the team; Carter wouldn’t like it. But Elias can deliver the death blow from outside the law, not because he’s a criminal, but because he loved Carter, too. And the reader/viewer gets catharsis in the end, very satisfying catharsis, without any damage to the main cast, or to Elias, for that matter.

Or to sum everything up in one sentence: Give the reader a reason to grieve, and then give her space to fully experience it and characters to share her sorrow. Killing a character and then not paying that character the respect of real, shared grief and catharsis makes both the sacrifice and the character smaller. Attention must be paid. 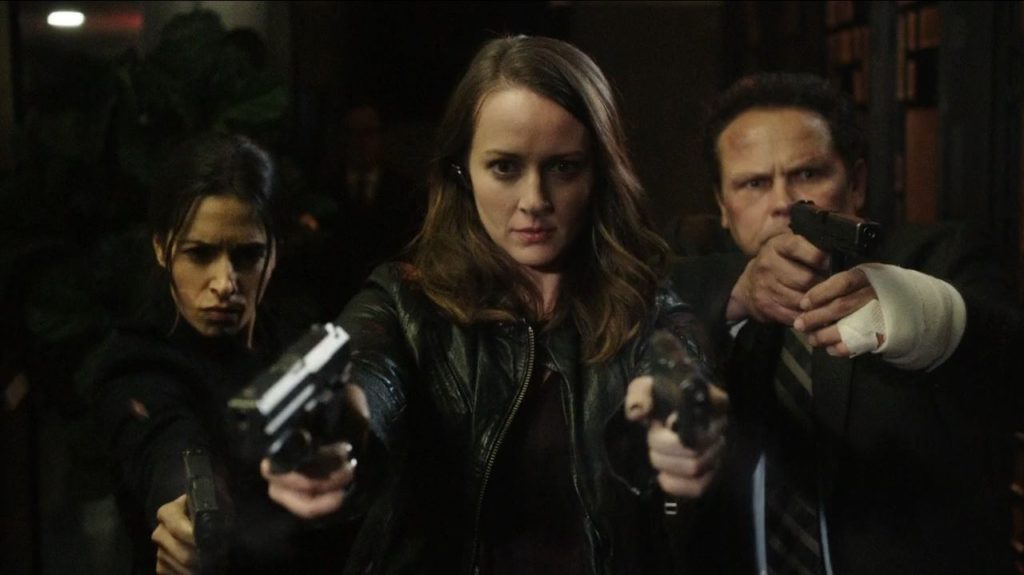 Weakest Parts
There are no weak parts. This is perfect story.

Smart Story Moves
Everything in here including the flashbacks. (Yeah, that’s how good it is.) But to be specific:
• Starting the story with the beep of Reese’s hospital monitors instead of the Machine, showing everything is wrong.
• The choice of “Hurt,” the Johnny Cash song over the montage. The montage had to be swift, cold, and wordless to capture that feeling of loss, but the measured, mournful grief of the song sells the emotion home.
• Lingering on the photo of Carter’s beautiful face at the funeral, reminding us of what we’ve lost.
• The Machine giving Finch the new number: Simmons.
• The flashbacks (I know, I know) showing the dysfunction of these four dangerous people. The flashbacks disrupt the narrative, but that’s important here because it captures the disjointed feeling of grief, while also showing how damaged Finch, Reese, Shaw, and Fusco are, and how Carter’s death is going to knife through them.
• Putting the focus of the story on saving Reese instead of avenging Carter, especially framing it as “Carter would want justice, not vengeance.”
• Drawing very careful lines from scene to scene; it’s a very complex story, a lot of different characters and different threads, and the connections are always very clear and easy to follow.

Favorite Moments
• Finch: “I want to know about grief. I want to know how it works.”
• Root telling Lionel where his name came from.
• “You sure the big guy’s here?” BOOM. “Pretty sure.”
• The team blazing its way through the hotel lobby, especially Root blasting the Russians: “Okay, that was kinda hot.”
• Finch’s soft voice talking Reese down. “We save lives.” “Not all of them.”
• Handing off the airfield address to Fusco, and then following it up with his talk with his therapist about the devil’s share, and then following that with his speech to Simmons that proves Carter’s legacy is lasting “I’m not going to let you undo all the good she did,” and then Fusco’s moment of redemption as he walks the captured Simmons through the squad room: two and a half years from the crooked cop who was going to execute Reese to the honest cop who refuses to execute the murderer of a partner he loved. That’s a character arc.
• Shaw going to steal more blood for Reese.
• Elias in the hospital: “There remains a debt . . . . I don’t think she liked me. But I liked her very much. You killed her.” And then “I’m just going to watch.”
• Bookending the beginning by ending on Simmon’s hospital machine flatlining. 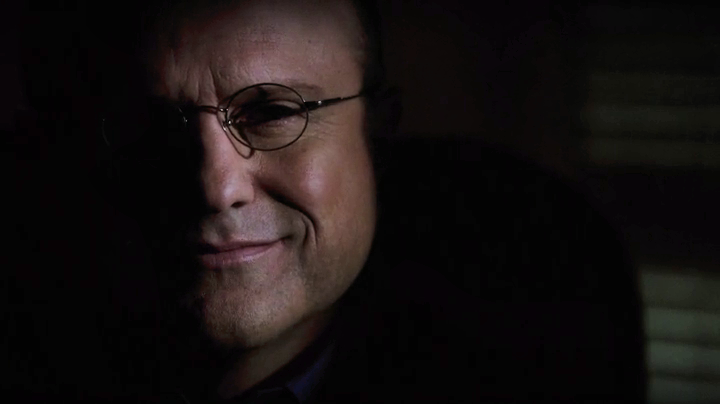 Ominous Moment
“We have a larger fight ahead of us. I think we should be together when that begins.”

13 thoughts on “Person of Interest: “The Devil’s Share”: Rip-Your-Heart-Out Storytelling”