But before that, they did some fan service and made use of that wonderful extended cast. Here’s what happened before this episode:

“Liberty” – Shaw’s part of the team! And trying really hard to only maim instead of kill. Also, the number is a great guy, Carter is working undercover on her own and collecting evidence on HR, Elias tells her where a good fence is, there’s a great shoot-out where rat bastards kill other rat bastards, and then Elias’s right-hand guy scores the millions and the diamonds, showing that Elias may be underground, but he’s still got the upper hand. And Root’s got a therapist! Plus Reese, Finch, and Harold running the main plot. See what I mean? An embarrassment of cast riches.

“Nothing to Hide” – A son-of-a-bitch number with a new murderous group (and more recurring characters) to save him from–this one’s called Vigilance–because Decima and the government and HR just aren’t enough highly-organized, murderous antagonist groups chasing Our Gang. This is one of those we-didn’t-save-the-number shows, but he’s such an awful, awful person (he hits Finch!) that we kind of cheer when Reese fails. 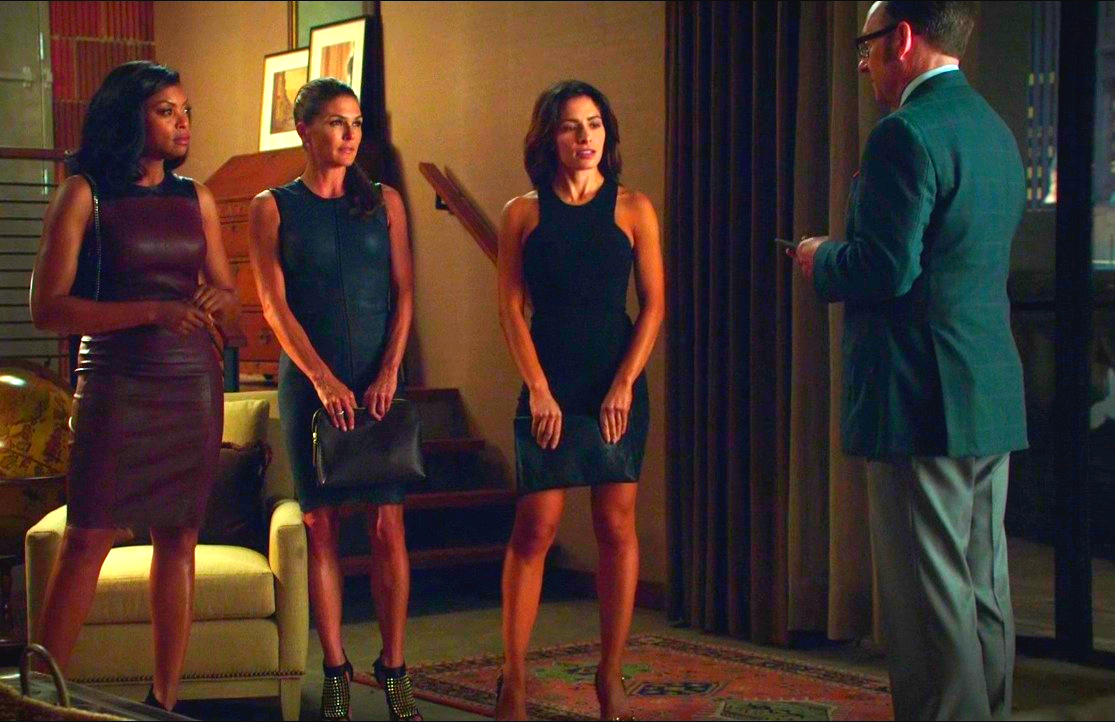 And then comes “Lady Killer.” I have to admit, this is not the strongest number of the week plot. Its biggest payoffs happen because a lot of people we like are here doing very good work to save him: Zoe and Shaw and Carter go clubbing to catch a serial killer who preys on women with the help of Finch, Reese, Fusco, and Bear, while Root and her psychiatrist and Hersh rampage through the excellent subplot.

So you have a huge cast (say the Archers, the Goodnights, and the Dempseys, oh my) all occupying the same story space. How are you going to handle that?

Do what the PoI writers did:
• Make sure everybody is really necessary to the story you’re telling. You’ll notice that Leon did not make an appearance. Neither did Elias. You can argue that they needed Zoe for bait as a generic Hot Woman, but what they really needed her for was access to the rat-bastard-antagonist, something only Zoe the Fixer could provide. They needed the Root subplot to show the Machine playing its game on multiple fronts. Nobody just showed up to say hi. Even Bear is there to show Shaw’s evolution from cold-stone killer to Bear’s Best Friend.
• Make sure everybody’s role in this specific story is clear,  and that it relies on that character’s personality and skills. One of my favorite moments in this episode is the number walking in and seeing each of the women. Zoe’s self-confident, Shaw gives him a basilisk stare, and then he finds Joss and she smiles because she’s an undercover cop. It’s fun because we get to see our favorites in action, but it also moves story and tells us a lot about the number.
• Play the relationships that make a recurring cast fun. Reese is worried about Carter letting her guard down; their relationship has grown really tight from mutual respect. Shaw tells him Carter’s not letting her guard down, that Carter’s doing everything exactly right; Shaw and Carter have a new and growing relationship because Shaw respects how smart and skilled Carter is. We like these people, we want them respecting and caring about each other in the context of the story. That conversation held over drinks wouldn’t have a fraction of the impact that it has because it’s played over Reese and Shaw both looking through gunsights on a rooftop, prepared to shoot anybody who attacks Carter. That setting makes it part of the story.
• Make sure everybody arcs because of what happens in the story. It may seem as though Zoe’s the same person–Zoe’s pretty much impervious–but at the end, she’s having a drink with two friends, which is probably not something she does without a professional angle as a fixer. Also, see Shaw and Bear, and Root and the Machine.

So what’s with that subplot then? How does shoehorning in the Great Loony Bin Escape fit with reuniting dad and son? Well, it doesn’t. It fits with the character arcs and the relationship arcs that the minimal number plot exploits to the hilt. It’s not that we’re not happy that the number gets his son, it’s that the recurring characters are doing so much while they make that happen. We’re in it for the people and the relationships this week, even more than most episodes. So let’s look at the subplot again.

Root’s been talking with her smug psychiatrist (psychologist? therapist?) for three episodes now, and it’s clear that he has no idea who he’s dealing with. It also becomes clear in her conversations with him that the Machine is trying to guide Root back to sanity, teaching her not to kill, to rely on the AI’s guidance, to be patient until she’s achieved mental equilibrium. Just as Carter, Shaw, and Zoe are forming a relationship in the main plot, just as Reese and Shaw are settling into an equal partnership, just as the Gang’s mutual respect for each other is reinforced, so Root and the Machine have come to an understanding and a partnership. As Root tells the psychiatrist, there are things the Machine can’t do; that’s what she needs Root for. The Machine needs Root the same way Finch needs his Gang: sometimes you need somebody active who can do things you can’t.

But I think there’s an even better parallel: Shaw. Shaw is a cold, solitary person, completely devoted to her job as a killing machine until she meets the Gang and begins to form bonds, with Harold teaching her not to kill people. Root is a cold, solitary person completely devoted to her job as a computer hacker genius criminal until she connects with the Machine and forms a bond, with the Machine teaching her not to kill people. These are two characters who are being led out of exile into community. Root’s journey is more mythic than Shaw’s which is rooted in reality: She’s convinced that the Machine is a kind of God–a theory that seems less insane the farther we go in this series–so you can see her time in the mental institution as her time in the wilderness, separated from civilization, a vision quest with tranquilizers and anti-psychotics. And when the time comes, the Machine leads her out of exile in a precision escape that leaves dozens unconscious, one wounded, nobody dead, and Root and the Machine as one terrifyingly efficient entity, just as in the next episode, Shaw will finish her journey and become a permanent part of the Gang. They’re both lethal, they’re both borderline sociopathic, and now they’re both part of something bigger.

Thank God they’re both on our side.

Smart Story Moves
• Showing Root’s evolution through the psychiatrist. I love every scene they’re in for all three of the first episodes in this season.
• The reversal that changes the number from a predator to a victim.
• “Alex is the heir, not the help.” Make your antagonist show you how evil he is.
• Showing Root’s escape, which is just freaking brilliant, all the time talking to the Machine, especially the last beat when the Machine won’t let her kill. It’s a very complex plot move, and the story shows it all very clearly without telling anything.

Favorite Moments
• Reese and Shaw in the boat. If you ever had any doubts that they’d never be lovers, it’s right here. They’re basically the same person, struggling to occupy the same space. They might learn to share, but they’re not going to like it.
• “Our guy just went from blueblood to hipster faster than you can say ‘ironic facial hair.'”
• The way they have the three women dressed; they look like they’re in armor, going off to do battle. Nothing fussy to get in their way. The shoes are not practical, but we can’t have everything.
• Shaw telling Carter that she can borrow her new gun any time. I love how excited they both are (Shaw shows emotion!).
• Reese gave Zoe a pink taser. I’m 99% sure the pink was ironic.
• “Really? A yoga instructor?”
• I would watch a show about Carter, Zoe, and Shaw every week, especially if they’re rescuing Reese from a refrigerator. And it wouldn’t be called Finch’s Angels, either. Chicks of Prey, maybe. No, that’s not right, either. Suggestions for titles in the comments, please.
• The way Fusco and Reese stick to Carter on the street even though she could probably take down the bad guy on her own. It shows how much of an emotional bond they have, especially Fusco saying, “Don’t go home, okay?” while she’s being tailed.
• Shaw bonding with Bear.
• Shaw: “What’s he doing? Should I shoot him?”
• Shaw: “Guys these days have so many emotions. They cry. They want to be held. I just don’t know what to do with them.”
• Okay, Shaw in general.
• “Are you as excited about this as I am?” And the phone rings.
• Zoe, Joss, and Shaw in the bar after they’ve saved the number. Really, I would watch every week.
• The expression on the psychiatrist’s face when he sees Hersh and realized Root isn’t crazy, at least not about the things she’s told him.
• How calm Root is because she has the Machine, especially the last move when she shoots Hersh.
• “Really? Even this guy?”

Ominous Moment
Harold walking through the unconscious bodies in the mental hospital as the psychiatrist staggers past in shock, Hersh bleeding but alive on the floor, and Root out on the loose . . .

Subsequently on PoI:
“Reasonable Doubt:” A lovely, twisty plot about a woman who may or may not have killed her husband that Reese solves by leaving a gun on a table. My guess: Somebody on the writing staff was getting divorced because that’s the second murderous matrimony plot.