Well, I’m worried, anyway. Those PoI writers will kill anybody.

“Root Path:” PoI gets back to what it does best: developing character and saving people. In this case, it’s Root, now part of the Gang, who crosses paths with somebody whose life she ruined back when she was a master criminal. The overwhelming guilt she feels is evidence on the page/screen that the Machine has changed her. Also, Decima gets a chip it really shouldn’t have, so while the number gets saved, the world is now in jeopardy.

“Allegiance:” The number of the week is being targeted by terrorists because she’s fighting to get a good man out of government custody and corrupt government officials are trying to silence her. it’s a good number of the week story, and underneath that, it’s a Decima story since the whole clusterfuck is caused by Decima getting generators into the country for its nefarious plans. The Machine sends Root and Bear after Decima, and Greer, Decima’s Darth Vader, offers her a job on their team. Root says no, now firmly part of the Gang, but she and the Machine recognize they’re up against something huge and powerful and kinda creepy.

“Most Likely To:” You know those episodes where the writers send the cast to a high school reunion and they have to pretend they used to be students there? Yeah, this is one of those. But it’s good, plus the number hits on Shaw and that’s always amusing, and the subplot with Finch and Fusco sharing a hotel room in DC is worth watching on its own. Also, Vigilance tries to kill everybody and then outs the Machine so the government has to deny its existence and shut it down, leaving an opening for Decima to weasel their own AI in (that would be Arthur’s Samaritan).

“Death Benefits:” The number this week is a corrupt senator; the reversal is that the Machine seems to want the Gang to kill him. In hindsight, this was a good call on the Machine’s part, but Finch objects and leaves, and Reese and Shaw just aren’t the assassins they used to be. Root’s traveling around working for the Machine, so the senator gets to live, and he takes the bribe to get Samaritan into the government with Control heading everything up again. They shoulda shot the senator.

“Beta:” The number is Grace, the love of Finch’s life, who’s kidnapped by Decima. Finch trades himself for her, and at the end of the episode, he’s in Greer’s hands.

“A House Divided:” FLASHBACKS. Sweet Jesus, the flashbacks and they’re all about Collier, the murderous bastard in charge of Vigilance, showing how he got to be a murderous bastard. I don’t care. He’s a zealot who kills people, so screw him. Then he kidnaps Greer and a senator and Control and Finch and several others and sets up a mock trial to be broadcast so the world can see how corrupt everybody is, which would be an admirable goal if he’d quit killing people.

Which brings us to the major turning point that is the Season Three finale: “Deus Ex Machina.” 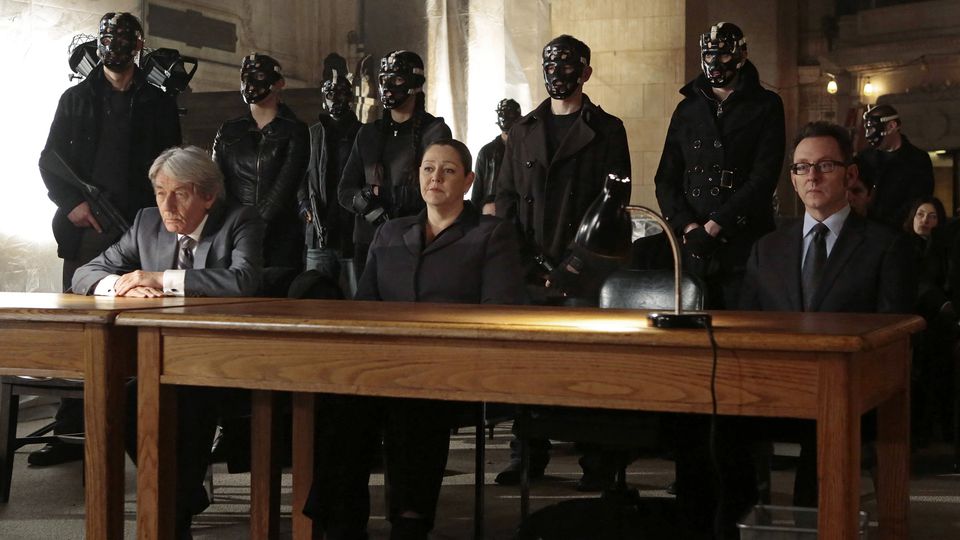 So this is our first crisis turning point, the place where all is lost and our protagonists (except for the Machine) are beaten: Decima turns out to be the worst of all possible antagonists, headed by Greer, a man so crazed by betrayal that he has decided to give the world over to the control of machines, in fact, one machine in particular, Arthur’s Samaritan. Samaritan is the stepbrother to Finch’s Machine except that Finch’s Machine was programmed with fail-safes; Samaritan is just pure AI. That means if Samaritan sees a threat, it will act to remove it, even if it involves killing innocents. “Innocent” has no relevance; it’s all about the Greater Good, and we know how that always works out. Greer is to Decima what Pierce was to Zola’s Hydra computer program: the power behind the implementation, both determined to wipe out opposition to world peace, as they define “world peace.”

So the big reveal at the end is that all the work Root has been feverishly doing with the Cartagena Three hasn’t been to defeat Decima and Samaritan at all; that battle has been lost since the Gang wimped out on killing the senator. What Root is doing is removing Finch, Reese, Shaw, herself and the three computer geeks from Samaritan’s sight: it thinks they’re all irrelevant, and its code tells it to disregard them. That’s the best that Root can do–worse, it’s the best the MACHINE can do–to defeat Samaritan in its attempts to wipe out all opposition. And that leads to final scene when Finch and Collier learn that Decima was far, far ahead of them, that the trial has not been broadcast to the country because Decima owns the TV station, that Vigilance was actually created as an unwitting arm of Decima, doing its bidding even while the group thought they were striking a blow for liberty, and that now that Samaritan has taken over the government’s feeds, they’re irrelevant. So Samaritan destroys them, Finch narrowly escaping death because the Machine is fighting a desperate rearguard action (and because Hersh ends up a hero; who’d have ever thought we’d mourn him?).

A good crisis turning point puts the protagonist completely on her knees, bruised, bleeding, defeated, and that’s where this finale leaves Our Gang. It destroys everything that came before–we’ll never go back to the library again–and forces the Gang to reinvent themselves as they realize the enormity of the threat that has just taken over the country. After this, everything is new again, and it’s terrifying.

As I mentioned before, one part of the gang who’s not defeated, though, is the Machine. She’s still going strong, watching the Gang’s back. To get to the Crisis point where they AND the Machine are done, you’re going to have to stick around for the Season Four finale.

So what does a crisis do, besides destroy the hopes and dreams of your protagonist?

It’s like a forest fire: it’s devastating, but it clears the underbrush to allow room for new growth. After three years, the Machine Gang had evolved into a group so efficient they were almost omniscient, but the enemies they were battling had also grown–the secret branch of government, Vigilance, Decima–so that the story was resting atop so much detail and history and convoluted master planning that it was imprisoned by its own past. This crisis point burns away all of that: Vigilance is destroyed and Decima and Samaritan have infiltrated the government and fused into one super-powerful antagonist, achieving the goal the Gang spent an entire season trying to block. It’s not just that the Gang failed, it’s that their community has taken a body blow, its members scattered, its base invaded, its enemy everywhere. There’s a reason that the crisis point in a story is often called the Dark Moment: the lights have gone out on the story, and the protagonist is down for the count.

The protagonist gets up again, of course. This isn’t the climax, it’s the devastation before the climax. It’s the burning away, not just of plot but of character barriers. Whatever line your protagonist had in the past that she or he would not cross, it’s gone up in smoke with everything else as she or he (or in the case of PoI, they) march irrevocably toward that last big showdown with the antagonist, no holds barred.

If you think Season Three was tough, wait’ll you get a load of Season Four. 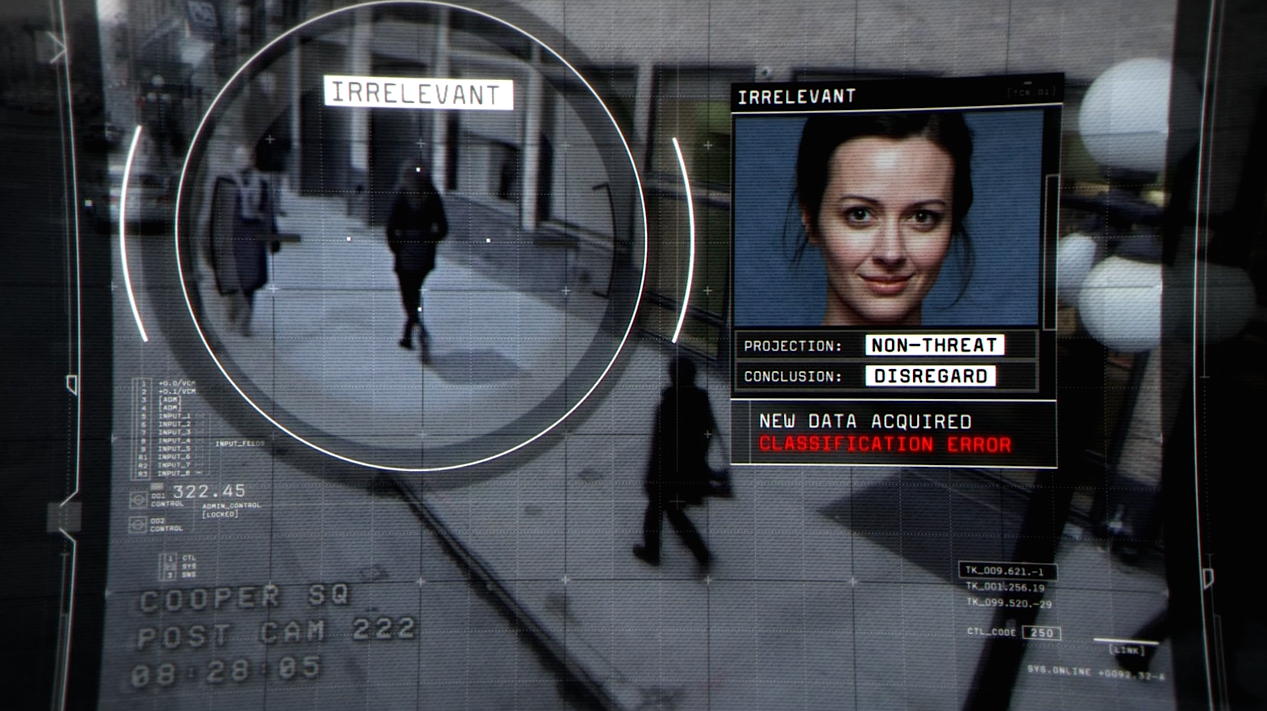 Weakest Parts
• Fucking flashbacks that once again are completely unnecessary, taking story time away from the people we care about who truly are in desperate circumstances. ARRRRRRRRRRRRRRRGH.
• The weight of an incredibly complex and convoluted story drags this down, especially the long Vigilance rants. Collier is a misguided, homicidal loon, drunk on power and purpose, but he’s standing beside Greer, who’s calmly handing the world over to a machine because he’s given up on humanity. A little less ranting and a little more direct action would have helped here, although I may think that because I arrived at the “just shoot him already” stage about the time he shot Sloan.

Smart Story Moves
• Balancing the tense but static courtroom scenes with the odd-couples-in-action: Reese and Hersh rousting Vigilance to find the courtroom, and Root and Shaw planting the corrupted computers in the heart of Decima.
• Greer delivering the death blow, literally and figuratively, to Vigilance. I still hate Collier, but that is a devastating revelation.
• Greer’s final act of terrorism, wiping out witnesses and ensuring that the government will turn to Samaritan. Greer may be evil, but he’s efficient evil.

Favorite Moments
• Shaw, Hersh, and Reese walking through the blackout like pals, especially Hersh taking a bike at gunpoint so Shaw can go rescue Root.
• “What Machine?” “What trial?” Fucso, safely out of the know.
• Shaw showing up to save Root. SHOOT!
• “I tried to quit, but some jackass told me I needed a purpose.”

Horrible Moment:
• Leaving the library for the last time, then watching it get ransacked by Decima’s jackbooted thugs.
• Decima and Samaritan wiping out the Vigilance people who would fight back.
• The Gang splitting up.

Ominous Moment
• “The time has come for your god and mine to do battle.”
• “This was never about turning it off.” “This was never about winning. This was just about surviving.”
• Samaritan coming online: “Let there be life.”
• “The question is what, my dear Samaritan, are your commands for us?”
Basically the last 15 minutes.

Next week: The beginning of Season Four (and in real life, the start of Season Five which I understand starts with a flash-forward so expect whining from me):
May 2: 4-1 Panopticon (Erik Mountain and Greg Plageman): Rebooting a Story After a Turning Point
May 3: 4-3 Wingman (Amanda Segel): Multi-Thread Plotting
May 4: 4- 11 If/Then/Else (Denise The): Point of View as Meaning