Apologies for this being late. For some reason, I set it to post tomorrow.

Turning points are places in a story where an event happens that’s so huge that it changes the protagonist and the plot, turning everything in a new direction. One of the things that makes binge-watching Person of Interest so much fun is that every climax of every season is a turning point, raising the stakes, evolving the characters, and making the story new again. The first season climax which is really stretched over three episodes does all of those things in spades.

[In anticipation of the question, “What’s the difference between a turning point and a reversal?”, a reversal reverses an expectation while a turning point turns the story. Finding out that Zoe wasn’t a hitter reversed Reese’s opinion of her and changed his next action, but the story didn’t turn until the bad guys tried to kill Zoe and Reese rescued her. That wasn’t a reversal because Zoe didn’t trust the bad guys to begin with and didn’t think John wasn’t on her side; no expectations were reversed. But the story turned because now Zoe’s a target, now she knows Reese isn’t just a driver, and now they’re in league to find out what’s on the tape: everything’s new and the stakes are higher. Having said that, sometimes a reversal is a turning point. They’re just not the same things, and they do different things for your story.]

Where was I? Right. Climaxes as turning points. I hate cliffhangers because they disrupt story and perform no useful purpose. If I don’t like a show, they can tell me everybody in it has been killed, and I won’t care enough to go back the next season. If I do like a show, I’ll be watching the next season to find out what happens next to the characters and the world I like. Proof you don’t need cliffhangers: two of the best showrunner/writers on two of the best series ever ended each season with a satisfying climax that always completed that season’s story: Joss Whedon on Buffy the Vampire Slayer and John Rogers on Leverage. That made every season of those shows a complete novel. 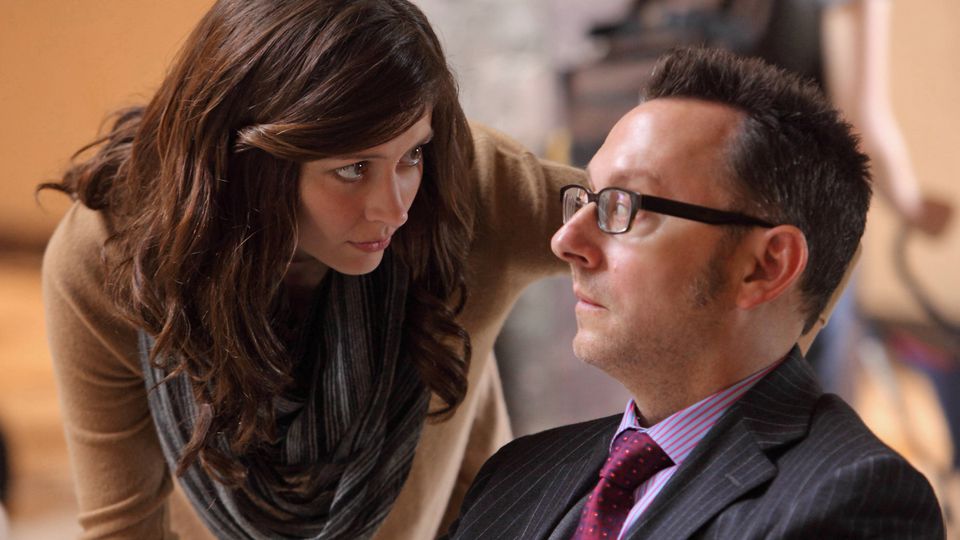 PoI takes a different path. If you binge-watch all four seasons that have aired so far, you can see that they’re four acts of a single novel. The season climaxes paired with the premiere of the following season operate exactly as turning points do, raising the stakes and changing the story to go in a new direction. It still annoys the hell out of me that they don’t just end the season instead of making it a two-parter with the next premiere, but I’m in awe of how they turn the show. Every season they made it new again, with much higher stakes, to the point where I’m almost glad they’re ending it this year because where could they possibly go next? (I know, they’re good, they’d find a higher plane to fight on.)

So first, “Firewall.”
At the beginning of the episode, it’s business as usual: there’s a number, Reese goes out to save her with Finch doing computer-fu to help. It’s a beautifully paced episode, no fat at all, as the stakes mount and the forces against them–HR and the FBI–track them down. Finch calls in help from Fusco, Carter, and Zoe, and they’re all working frantically, with the wild card of the strange woman, breaking into the library and finding Harold’s computers and whiteboards. It’s a great episode, but it’s a first season PoI episode with everybody doing what they do best, no worries about who’s going to win, just keen interest in how they’re going to do it. Reese sends Carolyn Turing up the ladder to safety and joins with Carter and Fusco for a nice bit of fan service, them all together in a car chase with HR ending in a well-deserved explosion, and all is well. Except that Turing is Root, she planned the entire thing, and now she has Harold, and Reese has no idea of how to find him. Business as usual is not going to cut it.

So Reese goes out to the street, finds a camera, and talks directly to the Machine as if it’s a person. Because starting at this moment, the Machine is a person. Conden called it “God” and so does Root in a later episode, referring to it as “she,” immediately making the Machine a “she” in the minds of the viewers. The Machine is no longer a computer, now it’s an AI, artificial intelligence, that is, an artificial person. It’s not a tool the Machine Gang uses, it’s one of the gang. And now it has Root coming for it, which means this is also the first time the Machine is in danger and poses a real danger: Whoever controls the Machine wields enormous power.

So the first turning point in the four-act (so far) novel that is Person of Interest is changing the story from a simple crime-of-the-week drama that has redeemed three lost, isolated people and Joss Carter (and joined them in a community they’re all dedicated to) into a complex examination of the use of artificial intelligence, particularly as it’s used by governments.

Smart Story Moves
Purely great storytelling again: Trying to help a woman against huge odds–HR and the FBI–great pacing, feeding the info to the viewer through the FBI surveillance through Carter and Fusco (each of whom doesn’t know the other is working for the Machine), Reese’s POV, Finch’s POV, Finch being observed by the unknown woman who breaches the library, Zoe working on the outside . . . there is no fat at all in this episode.
• And then Harold sciencing the save with cell towers and Reese getting the bad guys with a bomb, working to their strengths.

Favorite Moments
• Zoe! Especially Zoe finding out that Carolyn Turing scammed them all.
• Carter and Fusco finally finding out that they’re on the same team.
• “You created God.”
• Root calling her plan a “trust fall.”
• Reese talking to the Machine like a person, demanding help, and the phone ringing.

Ominous Moment
“So nice to finally meet you, Harold.” Amy Acker is so good in this (and continues to be amazing through the next three seasons).

“The Contingency”
First season: Harold’s good at working the Machine, Reese is good at action stuff, they save somebody weekly, while slowly building a team they trust: Fusco, Carter, and sometimes Zoe.
Second season: Harold’s been kidnapped and is going to have to learn action stuff; Reese is going to have to talk to the Machine, and the Machine is no longer just a Machine, now it’s Reese’s partner. Oh, and Carter and Fusco now know they’re both part of the Machine Gang. And HR has been wounded and is gunning for the Man in the Suit. And the FBI is closing in on the Man in the Suit. The tidy little project Harold designed and implemented through Season One in order to save people is now smashed, huge forces coming for it, and Harold himself is in dire danger.
Now that’s a “Things Get Worse” turning point.
One clue that this episode is still part of the first one: it starts where the last one ended: the phone ringing.
But there’s new stuff. For one thing, we have new antagonists: Control, the government agency that uses the Machine to prevent terrorist attacks now sees Reese as a Person of Interest, and they’re not particularly interested in prosecution (higher stakes). Oh, and Fusco and Leon are in the hands of the Aryan Nation for a while. But mostly, Root has Finch and it’s not going well.

Weakest Part
Flashbacks. Freaking flashbacks that get in the way of finding Finch, which is the story I’m invested in.

Smart Story Moves
• Showing how ruthless Root is instead of talking about it; that razor slash is shocking.
• Root’s idea that people are Bad Code, but the Machine is perfect is powerful motivation and characterization at the same time.
• Leon turning out to be valuable in finding out more about Root.
• Reese slowly establishing a relationship with the machine that will shift his and Finch’s roles as employee/employer. Reese calls Finch “my friend” several times, and now he’s on an equal footing as far as access to the Machine.

Ominous Moment
“I don’t want to control your Machine, Harold. I just want to set it free.”

And then the third beat in the turning point: “Bad Code.”

Smart Story Moves
• How damn smart Root is. How damn ruthless she is. And how crazy she is.
• Really, how smart everybody is. Nobody makes a dumb move in this.

Favorite Moments
• Root refuting the Wound as a motivation. Yes, a bad thing happened in her past, but Root was always a bubble off level.
• “Why is there a crossbow on the bed?”
• Fusco and Carter going out for a drink.
• Finch meeting Bear.

Ominous Moment• Root calling Reese to thank him, which sets her up as an ongoing threat at the same time it shows Control taking care of the inconvenient body Root left for them.

Summing up:
The first season of PoI is essentially what any first act is: telling the story while setting up the characters, goals, plots, subplots, and themes. So at the end of the first season, we know the four members of the Machine Gang (five, counting Zoe), we know the city they work in, we know what motivates them, what they’re proud of and ashamed of, why they choose to band together to fight the good fight, how they do the work they do, and how the power is distributed. By the penultimate episode of the first season, the world of Person of Interest is established.

Then at the turning point, they blow it up. The Machine Gang will go on fighting, but it’s all very different now, with a shifted power structure, and much tougher antagonists. It is, in short, brand new again. That’s what a turning point does.

16 thoughts on “Person of Interest: Firewall, The Contingency, Bad Code”