Someday, I’m going to do a post analyzing my top five TV pilots, and when I do, this episode will be one of them, along with the Leverage pilot and the first episode of the UK’s Life on Mars. (After that, I’m still cogitating.) It does everything a long-form story beginning should do, and it does it brilliantly. 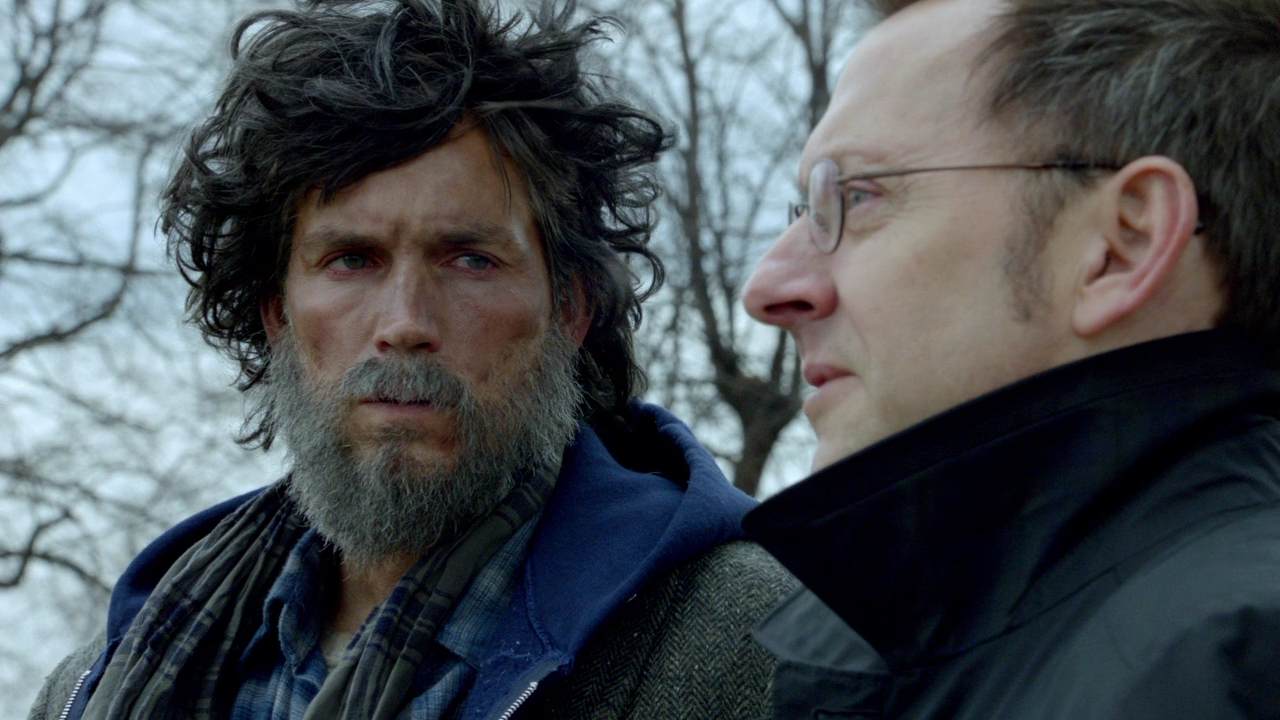 I think the show at its inception considered John Reese to be the central character (I’d argue now that it’s Finch) and that’s why the opening does the shorthand of here’s-Reese-healthy-and-happy-and-here’s-Reese-now. Since I’m not a fan of flashbacks (who knew?) I could have done without that happy-Reese part because the subway scene is so well done. One of the strongest emotions to evoke in your reader/viewer is outrage, the this-is-not-FAIR response in the reader or viewer. It’s what powers Cinderella (“She’s the nice one and she’s being treated badly!), Harry Potter (“He’s such a good kid and he’s being treated badly!”), Buffy (“She’s trying so hard to have a normal life and on one will let her!”), Leverage (“He’s in agony over the death of his son and that bastard used it to manipulate him and then tried to kill him!”) and so many more fairy tales, books, and film stories. Injustice is gonna get ’em every time. And that under two-minute subway scene is brilliantly unjust.

It’s particularly smart that injustice in this first scene comes at the hands of white trust-fund snots; there’s no excuse for the way they’re behaving, they’re just sociopathic punks. So when after trying to avoid the conflict, the tramp gets up and kicks their butts six ways to Sunday, the reader/viewer is cemented to him: he’s Our Guy. (When he does it again later in the episode, it’s just plain fun. Never underestimate the power of Fun.) This scene also foreshadows the later gun buy since Anton mentions it in Reese’s hearing, and it also establishes Reese as a dangerous man. All this in under two minutes. That’s a terrific introduction to Our Hero without feeling like it’s an introduction.

That scene gets us to the police station and the second of the important characters in the first season PoI community: Detective Carter, the smart cop with a heart, who tries her best to reach Reese in a scene that’s so pivotal there’ll be a callback to it in Season Three. The fact that Carter is the only truly emotionally healthy character in the entire episode could be chalked up to the fact that she’s The Woman, but she’s also tougher than the rest of the guys, more focused than the rest of them, and more thoughtful than the rest of them, clearly a character to reckon with. And that’s all done in another minute.

Then a lawyer shows up and escorts Reese out of the building (while the fingerprint guy is showing Carter the record that’s come up and asking, “Who you got down there, the Angel of Death?”) to meet his future better half, Harold Finch, in a deserted park at dawn, a fairly blatant setting-metaphor for the new life being offered him. Reese tries the hero’s Refusal of Call at the eight-minute mark, but Finch is stronger and smarter than he is and draws him in, not with money although he offers him that, but with what he knows he really needs, a purpose to his life. More than that, he’s offering Reese, a man with a savior complex, “the chance to be there in time.” Seen through the lens of four subsequent seasons, that offer takes on an entirely new level of importance as the Machine Gang races to save the world in Season Five, but it all begins with this pilot episode and this first offer of the chance to be there in time for this one individual victim.

So this beginning says, “The tone of this story will be tense and intelligent, the setting will be a cold and crowded city, the protagonist will be a damaged, isolated man outnumbered by the forces fighting against him, and the world will be a hyper-realistic modern jungle seen repeatedly through the eyes of an AI.” Swap out “a damaged, isolated man” for “a team of damaged people cut off from the rest of society” and you’ve got the beginning of Season Five. The people of PoI always work outside the system, always work under the radar, are always out-numbered, and know that they are going to be defeated sooner or later; as Finch tells Reese at their first meeting, if he agrees to work with Finch, they’ll both probably end up dead. Until then, though, they’ll keep heading back into the fight against overwhelming odds, and the subtext is that the fight is always worth dying for.

The episode’s save-the-innocent plot that follows this beginning is nicely done with great reversals and some truly tense scenes, but it’s there in service of the main conflict: it shows Reese that this is what he needs, giving Finch the win in the real protagonist/antagonist struggle of the episode, not the conflict between Reese and the corrupt police organization, HR, but Reese vs Finch for Reese’s future. It also brings in the fourth member of the community, the crooked cop Fusco who takes Reese out to the wilds of Oyster Bay to execute him and finds himself out-smarted, out-gunned, and out-sourced into doing good for the Machine-Gang-to-be, another beginning move that’s going to pay off in huge ways throughout the remaining seasons.

Introduces the main characters in vivid ways that lead the reader/viewer to want to know more about them.

Presents the protagonist/ antagonist conflict as not just an external battle of one man trying to co-opt another man into working for him, but extends it to a much larger battle that can be played out over an entire first act/season: the battle to determine what that man’s future will be. Which means it also

Sets up the character arc of the main characters, and in so doing

Foreshadows the community arc of four people coming together as a team.

Establishes the setting, which is not just New York, but New York as seen through the eyes of the Machine.

Establishes the Machine as the organizing principle, directing their actions and overseeing their lives, subtly foreshadowing the five acts/seasons to come. In this first episode, it’s just a computer program, an easy-to-understand concept that’s going to be blown wide open by the end of the season/act, evolving into an extremely complex concept by the end of the story in Season/Act Five.

Sets up the structure (number of the week) of that first act/season.

Symbolizes through the structure the meaning or theme of that first act/season (saving Reese; saving the solitary, guilt-ridden Finch; saving the surrounded-by-corrupt-cops Carter, saving the lost and despairing Fusco) by making each episode a single example of salvation that arcs the big one of the first season. Then it continues to expand on that beginning structure for the next three seasons and (fingers crossed) into the last season.

And it does all of that in forty-three minutes. Even if you don’t watch the rest of the series, the Person of Interest pilot can show you everything you need to know about elegantly introducing a compelling long-form story by making the ending inherent in the beginning.

Smart Story Moves:
• The careful set-up of reversal after reversal, none of which are gotchas.
• Having Reese ask “Where is the Machine now?” as subtle foreshadowing for the first season finale, creating a bookend for the season.
• Upping the stakes by having the victim’s young son with him; upping our hatred of corrupt cop Stills who smiles and plans to kill the boy, too.
• Showing the big shoot out as gun flashes seen from the outside, the Machine’s POV.
• Reese shooting Stills with Fusco’s gun, the first in a number of long-game moves Reese makes that show that Finch isn’t the only smart guy on the team.
• Finch offering Reese as much money as he needs to leave so that staying is a free choice, the only way that Reese can be a classic hero on a classic hero’s journey.

Favorite moments:
• Reese handing the trust-fund punks their asses. That never gets old.
• Carter sympathetically giving Reese a cup of water and then taking the cup for fingerprints and DNA.
• The library as secret fortress
• “I don’t like firearms.” “Neither do I, but if somebody has to have them, I’d rather it was me.”
• Ripping off the trust fund punks, especially the part where he shows Anton’s friend what’s wrong with the way he holds his gun.
• Standing in the middle of the street to save the kid in the car.
• “I offered you a job, Mr. Reese. I never said it would easy.”
• Reese telling Fusco he’s going to let him live because he’s loyal. “Do you have your vest on, officer?”
• The little boy’s ball rolling to Reese’s feet while he’s holding a gun on the thug, and Reese smiling and kicking it back while my heart pounded.
• The playback on the tape machine in court.
• “Is that where he is, Witness Protection?” “No, Lionel. He’s in the trunk.”

Ominous Moment:
Finch’s statement that “we’ll probably both end up dead.” Please don’t let that be foreshadowing for Season Five. I love these people.

29 thoughts on “Person of Interest: The Pilot: The Beginning Is a Promise”