1-2 “Ghosts”: Carter investigates “The Man in the Suit” as Reese and Finch with Fusco’s help save a traumatized teen who survived her family’s massacre. Solid story with flashbacks to Finch’s history with the machine. I hate flashbacks but I love Finch, so I’m torn, but the story-of-the-week is terrific.

1-3 “Mission Creep”: Finch and Reese try to save a returning soldier who’s gotten mixed up with a gang of thieves robbing a police evidence locker of a file labeled “Elias, M.” That’s gonna pay off big later.

1-4 “Cura Te Ipsum”: A revenge plot that twists and twists again. Carter gets closer to Reese and Finch. Reese gets Fusco transferred to Carter’s precinct so he can spy on her and slow down her investigation.

1-5 “Judgment”: A great episode about saving the kidnapped son of an honest judge pressured into throwing a case; lovely layers in this one, plus Reese trying to find out more about Finch, the very private person, which arcs Reese because he is also a very private person. Reese and Finch will eventually bond as brothers, but it takes awhile because they do it carefully (two porcupines mating). 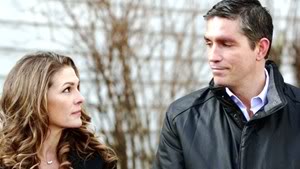 I love this episode for many reasons–Reese forces Finch into the field and he goes, bitching and moaning but he goes; Reese has to be subservient as a driver and it’s clearly a strain; Finch spends millions to buy into a corrupt company and then makes millions more when he brings it down–but mostly I love it for Zoe, the beautiful, tough fixer who dazzles the usually dour Reese by playing the game as well as he does.

Up until this episode, the characters outside of the main cast–Reese, Finch, Fusco, and Carter (who’s still outside the inner circle but getting closer)–have been single-episode-only people. Zoe is the first recurring/supporting character, and she’s also the first that you want to be a recurring character because she’s useful in so many ways.

• She makes our hardened hero Reese vulnerable because he’s so attracted to her.
• She’s the female equivalent of Reese–tough, damaged, cynical, and determined–which means their exchanges after she realizes he’s not just a driver are between equals.
• She gives the depressingly isolated Reese the promise of a future social life so she lightens the darkness of the series.
• She’s a strong shot of estrogen in a testosterone heavy atmosphere (even heart-of-the-series Carter is a tough cop).
• She has a very real and very useful skill as a political fixer. She knows everybody’s secrets and she knows where to trade a favor or apply some pressure to make things happen.

That means she’s a great example of the many ways to use a supporting character who’s not going to be part of your main community:

All of this falls in line with Lani’s theory that any character has to work many jobs in a story to earn his or her keep. You can’t trot characters on stage to fulfill a single need; once you get them up there, make them multi-taskers.

It does not hurt at all that Zoe never falls into any of the hot-woman-on-TV traps. She’s ahead of everybody else most of the time, she never panics, she’s always thinking, and when things blow up out of her control, she accepts rescue as just what’s due her. Zoe’s the protagonist in her own story at all times, and Reese and Finch pretty much realize that and accept that once she walks in, they’re just supporting players, not because she’s beautiful but because she’s the smartest and most ruthless person there. Zoe uses her beauty and her sex appeal as weapons; she never, ever takes them as her identity.

“The Fix” is a story has PoI‘s usual fast reversals–Zoe’s a hitter; no, Zoe’s a fixer; no, Zoe’s an opportunist; no, Zoe’s a betrayer; no, Zoe’s a hero–and its usual rat bastard antagonist who emerges in another reversal–PoI is right up there with Leverage and Dick Francis in the son-of-a-bitch antagonist department–so the plot is paced beautifully, picking up speed as it becomes more complex. But it’s also something new in the PoI playbook: it’s sexy. Neither Zoe or Reese has any time for fooling around at the moment, and they’re definitely not interested in love, but hey if a window opens up . . . . Call them Colleagues with Benefits or One of the Most Equal Sexual Relationships on TV, they are just fun to watch, and thank the showrunners for bringing her back for later episodes like “The High Road” in which she and Reese pretend to be married in the suburbs (with Bear! and a lot of booze because Zoe isn’t any better fit in the suburbs than Reese is), or “Lady Killer,” the episode in which she and Carter and Shaw go undercover in hot dresses in a nightclub (she carries the pink taser Reese gave her) or “Booked Solid” where she helps them with a hotel job and then at the end . . .

Okay, she shows up a lot and she’s always welcome because she’s so well established in this first appearance.

The one I remember best, though, is a brief appearance at the end of “Root Cause,” an episode in which a man who’s been framed and will be putting his life back together with Finch’s anonymous help is still beset by the media camped outside his house. Zoe doesn’t go in for backstory much, but she does tell Reese in this episode about why she became a fixer:

“My dad was a party man. Machine politician. He did what he was told. Right up till the cops showed up, put the cuffs on him. The local press was camped out on our law for weeks. Then this guy showed up. The guy that the party would send to deal with uncomfortable situations. He said two words. And those reporters? They packed up and they left. And they never came back. And I realized, “that’s what I want to be.” The person who knows what to say, and always has something to trade.”

At the end of “Root Cause,” Reese is watching the vindicated number’s house surrounded by reporters as Zoe arrives. She gives John one long look of acknowledgment, and then she crosses the street and does for the number what that political fixer did for her mother so long ago. It’s just a moment in a coda, but it’s a great example of the emotional power of a recurring character. I don’t think I’d want Zoe in every episode, she’s too overwhelming, but like salt, she makes every episode she’s added to better.

Weakest Parts
There are no weak parts, probably because there are no flashbacks.

Smart Story Moves
• Zoe’s Character: She could so easily have been a bimbo-of-the-week, but as written by Nic Zeebroeck and Michael Sopczysnski, and as played by Paige Turco, she has is smart and skilled and coldly efficient.
• Keeping the viewer firmly in Reese’s PoV so that none of the uncertainty is manipulative, it’s an integral part of the story.
• Using Carter’s subplot to set up the next episode without the story every feeling like set-up.
• Giving Finch a stake in the case by making one of the clues a dead woman who was a number before Finch found Reese. The “I couldn’t save her, but I can stop them” ties into the savior theme, and Finch’s barely disguised rage is wonderful motivation. “Before I found you, the numbers haunted me . . .”
• The pacing: lots of things happen quickly, but it’s always clear what’s going on.
• The police lieutenant reversal. Talk about tight plotting. And the finish of that plot with one line in the last scene.
• “You’re probably one of those guys who can get out of anything with a paperclip.” Sounds like banter, but it’s really foreshadowing.
• “You don’t know anything about me.” “I know almost everything about you.” All of Zoe’s backstory, right there. Genius.
• “Lucky you.” Matt Servitto making the “Now I’m going to kill you speech” an extension of Douglas’s sadistic character.
• Cutting the climax back and forth between the action climax and the business climax, so we get Reese tazing one murderous jerk, and then the real death blow, Finch shorting Keller’s company. So much catharsis delivered simultaneously. “I know the only thing you do care about is money. So that’s what I’m going to take from you. All of it.” And then capping that with Carter finding Sully. Brilliant structure.

Favorite Moments
• “Which son?” “Andy, the younger one.”
• Finch breaking and entering like a badass.
• “Who wouldn’t?”
• Watching Zoe work the police captain, the journalist, the Big Pharma people by keeping a copy (“I’m discreet, not stupid”).
• Dan Hedaya as Sully; I love when great character actors show up. (Fingers crossed that Mark Shepherd shows up in Season Five.)
• “I hate jazz.”
• “Mark? Why aren’t they dead yet?” Excellent outrage-inducing antagonist.
• “Be reasonable. Every new drug has side effects. That’s why we have disclaimers. And insurance.” Pitch perfect dialogue for a sociopath.
• The paper clip kiss.
• “You got my number,” and Cat Power singing “New York, New York.”

Next PoI Post: “Witness” next Monday; we’re talking about reversals.

20 thoughts on “Person of Interest: The Fix: The Power of the Supporting Character”