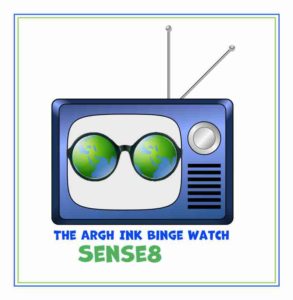 Somewhere around my third or fourth viewing of this series, while I was still trying to figure out what the hell went wrong with such great stuff, I realized that I was staying for the romances, both the romantic couplings (and tripling) and the romance of the ensemble. I stayed because I loved the characters and I wanted to see them come together (not a double entendre). So I looked closer at the four love stories in the series and at the building of the ensemble. Ensemble later; let’s talk about how amazingly good the love stories in this series are. I used the four basic steps of building a love story (a vast simplification of a vastly complex human emotional arc) as a rubric for this post. This is entirely arbitrary and should not be interpreted as The Only Way To Structure A Love Story. It is, however, a pretty good approach for arcing a relationship. END_OF_DOCUMENT_TOKEN_TO_BE_REPLACED

May 15, 2017 SECOND THOUGHTS: Some of the exhilaration goes in seeing these scenes so many times, but watching the connections grow remains emotionally satisfying.  Most of my irritation about the incredibly dumb use of opaque infodump, however, is still fresh.  Jonas may have gotten captured, but he deserved it for being so smarmily coy about saying, “You’re psychically linked to seven other people all over the world and somebody is hunting you.”  On the other hand, Capheus and Nomi being rescued by the Cluster will never get old, especially that scene in the alley with Nomi, Will, Sun, and the Capheus.  Just pure joy.  And then there’s the karaoke scene.   Set-up strangles the first part of the first season, but it’s the Cluster in action that really is the story.  Lesson: BACK STORY KILLS.

Aug. 4, 2015 Warning: HUGE SPOILERS IN THIS POST. One way to look at a story is that the protagonist moves from stability to stability. That is, he or she is living in a world that he or she understands how to negotiate and feels safe in because of that, even if it’s a miserable world to live in. The story starts when something happens that shatters that stability, and the protagonist battles the antagonist (and the cause of the instability) until one of them wins, the story ends, and the world becomes stable again, albeit a new kind of stability that reflects who the protagonist has evolved into during the struggle of the story. END_OF_DOCUMENT_TOKEN_TO_BE_REPLACED