Mondays have turned out to be the day I look at the collage and see what I’ve done that week (fitting for a collage for a book called Monday Street), and what happened this week was relationships.

So first, the collage as it is now: 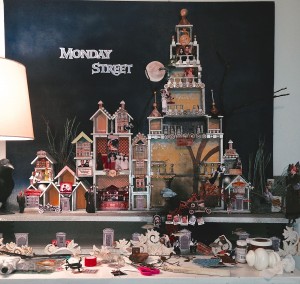 More detail, right? Sometimes it’s just more detail, period, sketching in some of the supporting characters and street detail, like Martine, the extremely shady pharmacist (her absinthe is criminally good) and Madame Normand, the fortune teller. (Yes, I know the absinthe isn’t yellow. I couldn’t find my green food coloring so I used pickle juice. It’s not working.) 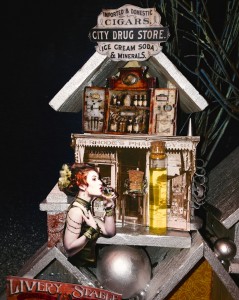 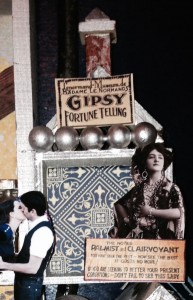 But I also found myself putting together important relationships in the story. For example, Toni’s hero drafts my hero into his organization, the black ops division for the country hidden behind the Department of Extraordinary Complaints, a low level bureaucracy where public servants go to die, so I needed to show that relationship, Harry up front as ever and Rafe in the background, working behind the scenes.

And then Toni’s girl, Keely, is undercover as a waitress in the same restaurant where my Cat works with another girl named Pansy who, we discovered this week as we brainstormed in e-mail, is a magic damper. So I did a lousy photoshop of their heads on waitresses from 1910 and glued them into the restaurant. The photoshop is lousy, but the possibilities of conversations among those women that the bad photoshop sparks are not. Plus putting them into the Ear gives them a context and restraints they won’t have in other settings. Plus those clothes. Talk about smothered lives.

And of course, there’s my romance. I had a good grasp on the relationship, but I wanted to really write the romance this time, so I googled for “vintage kiss” and then plastered my findings all over the collage to remind myself that this is a romance, damn it. Kiss the girl, Harry. 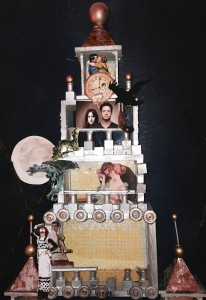 There are other details I added, like the air fish in the crypt and Perch on the bell tower and lots of details of Edwin, the raven, and some details I made bigger as Toni and I brainstormed the story and realized that things we thought were just details–St. Margaret, for example–were actually going to be major: if you’re major in the story, you get a bigger picture. And then some of it I just added because I liked it. There are a lot of windows in there. I liked the way the windows looked. It’ll probably turn out that those windows are important, but for right now, The Girls in the Basement said, “Ooooh, windows,” so we got lots of windows.

At the same time I’m doing the collage, Toni and I are maniacally brainstorming together on the world, putting up Pinterest boards, starting a brainstorming blog, keeping the story wiki up to date, so the collage is only one part of this discovery process. Sometimes I just do bad photoshops because I need to see what things look like. Like the air fish in the crypt:

But the collage is the touchstone for me. When it’s a little bit farther along, a couple more weeks probably, it won’t be finished, but I’ll look at it and it will put me into the story instantly. That makes all that bad photoshop worthwhile.

25 thoughts on “The Monday Street Collage: Details Add Up”