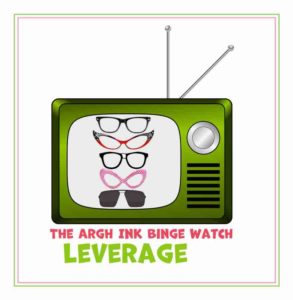 As I think I’ve mentioned before, I’ve figured out why the last season of Leverage is my least favorite even though it has wonderful episodes: Each story moved the team closer to splitting up. As a writer, I applaud this. After four years, the team members are not just masters at what they do but tightly bonded in a family that nothing can destroy. Which means there’s no place else to go unless they find a way to destroy that invincible family.

Thankfully, they didn’t do that, but they did change the community, moving toward Nate and Sophie’s marriage and retirement from the con and the new Leverage International headed by, of all people, Parker, ably supported by Eliot and Hardison. It was absolutely the right thing to do narratively and creatively, but it took away the thing I loved best about Leverage: that family of five working together. I’m not complaining, I don’t see any other way they could have gone in a fifth season, and I would have said, “Hell, yes,” to a sixth season, but still . . .

Two of the season five episodes really sell the coming split: “The Rundown Job” and “The Frame-Up Job.”

In “The Rundown Job,” Eliot, Parker, and Hardison are in DC for a diamond heist (for a good cause, of course) when they’re drawn into a domestic terrorist plot. Nate and Sophie have stayed in Portland, so it’s just the three younger team members, planning their own counter-terrorist moves, relying on each other’s strengths and trusting each other completely. Hardison figures out what’s going on, Eliot takes down the bad guy while taking a bullet, but Parker is the one who saves the day, neutralizing the biological weapon by being smart, active, and brave because if she doesn’t, people will die, something she’d never have done in the pilot episode. It’s a great episode, more action-oriented and fast-paced than usual, underscoring their less deliberate approach now that Nate’s not planning their every move in advance. (Also Adam Baldwin’s in this one, always a plus.) 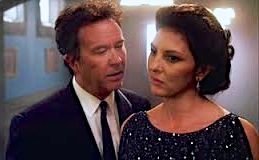 Meanwhile, back in Portland in “The Frame-Up Job,” things are moving at a more adult, mannered pace. Sophie ducks Nate to go to an art auction that has a painting from her past, and of course Nate finds her anyway, he’ll always find Sophie, and that’s a good thing because Sterling arrests her for art theft. It’s a light-hearted Thin Man homage, with Sophie and Nate bantering non-stop, a rich old victim, battling noir relatives and employees, and Sterling being Sterling, all of which means it’s a lot of fun, a complete 180 from “The Rundown Job.” But it’s also there to show their future. They are rock solid as a couple now, married in everything but name, relaxed with each other even when they’re arguing.

What’s notable about “Rundown” and “Frame-Up” is that the two halves of the team don’t call each other for help: Nate and Sophie have taken their criminal partnership to a new level of life partnership, and Parker, Hardison, and Eliot are now fully functioning, fairly mentally sound adults who work as a well-oiled machine, capable of handling anything on their own because they’ve learned to see the big picture (masterminds) and to pull cons (grifters), taking over Nate and Sophie’s roles and demonstrating that they’ll do just fine on their own as a team.

Even in the context of team-as-family the split works: Nate and Sophie are ready to be empty nesters, and the kids have grown up and are finding their own way. So intellectually, I understand why the community has to split. It’s just emotionally that I resist the natural evolution because I so love that Leverage team.

And that may be the Kryptonite of team building: the community has to evolve or stagnate, and when the evolution reaches its point of most stability, the story is over. I’d still watch seasons six, seven, eight, through twenty-four of Leverage if they brought it back, but I can recognize that the writers left the series in a good place at a good time. The next episodes before the finale seem weak to me, not because they’re badly plotted, but because the team is too damn strong. They’ve become superheroes, invincible, so all the tension is gone. It really was time to split the team.

Which brings us to the question of when a story or a series is done. Life on Mars has sixteen episodes, way too few, and yet it ended where it was supposed to end, one of the many reasons it’s superb. Other shows keep going because they’re making money and then degenerate into blandness, tarnishing their early seasons’ shine. I still see Season Five of Leverage as an epilogue after the fantastic “Last Dam Job” showed the team finally bonded and secure. But I also love the way they arced the team into two parts while leaving them a family, and I’d love to see shows about Leverage International, the new team with new problems to work out. I really would have liked another season. Or four. Just give me back that community, please.

7 thoughts on “Leverage Sunday: The Frame-Up Job and The Run-Down Job: Evolving Community”