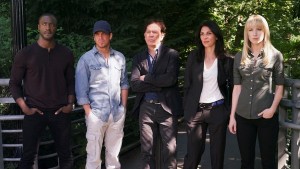 Here’s the problem with writing a series, any kind of series: every time you end a book or a season, you create a turning point, a culmination of that story. If you keep creating turning points, eventually the reader subconsciously starts to think, “Are we there yet?” And if you create an turning point that answers all questions and leaves all the characters in a place of strength and stability, you’re done. Anything you write after that will be epilogue, the stuff that happens after the story is over. Some series manage to avoid that trap by stopping after that satisfying ending (Life on Mars was brilliant at this); some keep going and slowly run out of steam (The Mentalist ended when Jane killed the Bradley Whitford Red John; everything after that felt like milking a premise to earn money). Leverage managed to makes its epilogue season–Season Five–entertaining still, but much of that was because they evolved the team into something else. Season Four was the last act of the Leverage team in the sense that this is the season that brought them to stability, security, and happiness as a team. END_OF_DOCUMENT_TOKEN_TO_BE_REPLACED

Is there such a thing as too much research for a story?