I vote yes to discussing how and when to deploy backstory effectively . . . And maybe I’m sort of asking another question all together about flashbacks vs backstory and whether which way we get the information makes a difference to how I feel about a character.

Let’s start with what back story is, then go on to the difference between flashback and memory as a way of putting back story on the page, and then talk about back story and character.

Back story is the stuff that happens before the story starts.

Because your story is happening now in the reader’s mind, it’s a living thing; every time you interrupt the story to explain back story, you cut into it and make it bleed. Therefore, back story should be avoided at all costs.

Note: This applies only to linear/chronological storytelling. If you’re using a patterned narrative, you can go all over the place.

Flashback and memory are the two most common ways of screwing up your story in the now with back story.

A flashback is an event from the past shown as a full scene as if it is happening now, even though it isn’t. (The flashback, like the cake, is a lie.) Flashback cuts into your story to take the reader back to an event in the past so that she can read a scene that is not only not part of your story, it has no relevance to your story because what actually happened in the past is gone. The facts of the event evaporated right after it happened and it immediately became memory, or rather memories, the different versions that the people who were at the event constructed to explain it. There is no past in the now, there are just memories of what people think happened in the past, so what actually happened at that event is irrelevant and unknowable. So flashback in a chronological narrative is essentially useless.

Memory happens when a character in the now of the story remembers something that took place in the past. It’s better than flashback because it’s part of the now of the story, and it can be very useful if the important thing about the memory is the event in the now that evoked it, but it’s still deadly when misused because it results in sittin’ and thinkin’ scenes in which nothing happens, so the plot doesn’t move and character doesn’t change, the character just thinks about back story because the author wants to get that info on the page.

But, you ask, what happens when the stuff that happened in the past is important and must be on the page?

Look at your definition of “important.” If it really means, “It’s easier to explain this character by showing an event in her past,” that’s not important, that’s a misconception on two points.

The first is that a character’s reaction to any past event is an explanation for current behavior. Ten people can be traumatized by the same event, and they will react in ten different ways, take ten different paths, because no human being reacts to events in exactly the same way. So dropping the back-story-as-fact (which is really a subjective memory) into a story to explain something is useless.

The second is that one event in your character’s past does not inform her character, it’s the thousands of events that have happened to her since birth that have made her the person she is today, along with whatever genetic dispositions Nature packed into her before birth. That one event may be a piece of the puzzle the character is now, but it in no way completely explains or motivates her behavior now

Therefore do not use back story as explanation or motivation for character action: character is what we are now, how we act, what we say, how we think now, not what happened to us in the past. I can’t make this strong enough: Dropping big chunks of back story into the now of the story to explain something is useless and damaging and should be avoided at all costs.

Yes, I know that’s upsetting. Now let’s look at how you can use brief memories of back story in the now of the story to build and arc character.

Let’s start with our character, Jane. Jane is at a party chatting away, when Richard walks into the room. Jane freezes. The person Jane is talking to says, “What’s wrong, Jane?” Jane says, “There’s that bastard, Richard, who ripped off the head of my Barbies when I was six.” The person Jane is talking to says, “Let it go, Jane, you’re forty-two, it’s time to move on.”

If Jane does move on, you can cut that entire bit because that piece of back story, while fun, is completely unnecessary to the story.

If Jane does not move on, if the thought of her topless Barbies now haunts her and she begins to stalk Richard, planting Barbie heads everywhere he goes and slowly driving him mad, you can keep that bit and leave the back story as that one line. The reader knows all she needs to know to understand that Jane is a complete whack job, not because of what happened in the past but because of Jane’s actions now. Character is action now, not in the back story. What makes the Barbie back story important is not that it happened, but how Jane is acting on that memory now.

Have I mentioned that you should stay in the now of the story?

The key is to only give as much back story as the reader needs to understand the story she’s interested in now. She doesn’t want a flashback to Richard topping Barbies because she knows that happened. Move on, she thinks, What’s Jane doing to Richard now? Ah, he’s just found a Barbie head floating in his French onion soup, its plastic tresses tangled in the cheese. Now Richard’s throwing up on the waiter. Who cares what he was like when he was six, what’s he going to do now?

In short, stay in the now.

And now, looking into my crystal ball, I foresee these questions:

Can I have my character think about back story if something in the now of the story triggers the thought?

Okay, remember you’re in the now of the story. Richard has just said something to Jane that made her remember that he ripped the head off her Barbies. How much time does Jane have to think before she snaps at Richard? Whatever you write has to be in real time, Jane can’t remember the whole sordid story in the middle of the conversation because (a) people don’t have long memories when they’re involved in conversations, especially if they have a violent reaction to the memory, and (b) Richard’s gonna notice that long silence and ask questions about it. So you get exactly as much time to write back story as Jane has to think the thought and continue the conversation. Which probably means something like You bastard, not a detailed image of how the Barbies looked topless. 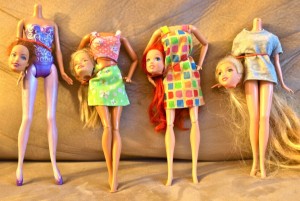 Fine, she’s not in conversation, she’s staring out a window thinking about the whole thing. Is that okay?

A scene is two people in conflict. If she’s staring out the window thinking, she’s passive, alone, and not in conflict and therefore not in scene and therefore you’re not telling story. You can fix it by putting somebody else in the scene and creating conflict, but then you’re back to conversation (see Jane and Richard above).

Okay, FINE. How the hell do I do back story then?

You don’t. If it’s not part of the ongoing plot, people don’t need to know it. Write the story without the back story and give it to your beta readers; if they don’t ask for more information, the story doesn’t need it. If they do, find a way to make the information BRIEFLY part of the ongoing plot, usually by somebody in the now questioning the actions of a character in the now and demanding an explanation.

Yeah, I know that’s hard. I’m working on two different novels right now that are lousy with back story, so I feel your pain.

In conclusion:
Most of the time you don’t need back story because what’s happening now is what’s important. When you do find you need it, it’s because something happening in the now is caused by the back story resurfacing in some way and that reemergence becomes part of the now. It’s not what happened back then that’s important, it’s the effect of that event on the current story that’s important.

Standard Disclaimer: There are many roads to Oz. While this is my opinion on this writing topic, it is by no means a rule, a requirement, or The Only Way To Do This. Your story is your story, and you can write it any way you please.

61 thoughts on “Questionable: Back Story and Flashback”