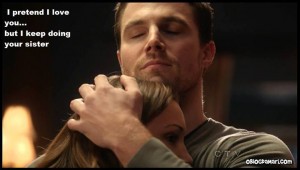 This is pretty basic; it’s the same as the contract that mystery writers make with their readers: The ending will see this mystery solved. That sense of justice restored and narrative completed pervades much of storytelling; at the beginning, the stable world of the story is plunged into chaos and at the end, justice and stability are achieved again, albeit not necessarily the same stability. In the romance, that justice is emotional: good, flawed people find each other, make mistakes, grow, and in the end commit to each other and form a stable relationship, a bond made possible because they’ve fought the good fight.

But the reader can’t follow the good fight unless that contract is in place. That is, just as a mystery reader has to know who the detective is and what the crime is, so a romance reader needs to know who her lovers are. Even if the romance in the story is relegated to the subplot/B plot, that contract has to be in place. Romance readers don’t need the romance resolved right away, and in fact the harder the romance is to navigate, the better the romance plot because stress causes adrenalin which makes people vulnerable and impulsive which leads to more emotional upheaval; a romance under stress is a perfect example of emotional escalation. But readers do need to know who the parties to the romance contract are. Before the contract, the story is just a lot of people running around screwing up personal interactions. After the contract, those same screw-ups become barriers to and escalations of a clear plot. If you’re going to write romance, even as a subplot, you need that contract.

I’d asked Pam about Arrow because it’s currently hurtling toward one of the biggest train wrecks of romance writing I’ve ever seen. Here’s what she said about the Arrow romance contract:

But who is the other party to the courtship? In romance (hetero and lesbian), readers/viewers focus on the female, for all that male romance characters now share point of view and have detailed character arcs. So, who is she? (Oliver seems to be hetero, so I’m not asking who he is, although the homosocial aspects of superhero fiction are pretty interesting. I’m also not asking who they are, because the assumption seems to be that this will not be a menage, although with these writers, who knows?)

Of course, Arrow isn’t a romance, it just has romantic subplots, but even those need a romance contract. Take the Oliver/Helena romance. The contract was established early, supported by the connection they made due to their matching pathologies and then broken by the fact that Helena was a lot crazier than Oliver. It wasn’t a long romance, but it had a clear contract, a clear arc, and an understandable ending. Nobody ever asked during that subplot, “Who is she?” “She” was Helena.

We have Laurel: the barrier here is that Oliver slept with her sister. Your term, “bleah,” seems a bit mild here. Nothing like destroying a romantic relationship and a family in one go.

We have Felicity: the IT girl who, when she showed up, the viewers said: “That one.” I recall that one of the commenters on Argh reports thinking, “There she is” when Felicity arrived. So the part of the romance contract that requires a viewer to be able to identify the parties to the courtship seemed to be fulfilled for many viewers: Felicity from IT was it. Writers of fan fiction proceeded to write Oliver/Felicity scenes.

Ending the introduction of potential female parties to the courtship here would have left the I-know-who-is-in-the-courtship requirement of the romance contract fulfilled. The writers of Arrow, following the romance contract, would pursue the Felicity relationship, presumably inventing many barriers to its ultimate fulfillment.

But then Oliver kisses Sara. Now who is Oliver courting? Viewers don’t know anymore. They thought they did, but now they don’t.

This for me is the real problem with the Sara kiss: it breaks a contract that many viewers made with the writers and that the writers seemed to acknowledge in later Oliver/Felicity scenes. When you add to that the original contract the writers did make with the viewers, the Oliver/Laurel contract, it puts the writers in the shoes of that guy or girl who flirts with you, tell you that you have nice eyes, promises to call, and then makes out with somebody else at the end of the bar. It’s not that anybody is expecting Oliver to show up with a ring and propose to Felicity or Laurel, it’s that the writers are flirting with too many love interests simultaneously. If they pick a lane, if for example, they make an Oliver/Laurel contract and fulfill it, finishing that romance plot,and then make a new contract with the viewer for an Oliver/Felicity or an Oliver/Sara romance, the viewer can still keep a grip on the story. The length of the contract isn’t particularly important, either; there just has to be a contract.

A romance plot that refuses to identify the parties to the contract becomes a story with blank spaces that the reader has to fill in. This is why writing romances with more than one possible love interest can be such a dicey proposition: if a writer asks the question “Which one?” readers will answer, and if they pick a different love interest from the one the writer chose, the ending of the romance will be a failed catharsis of Biblical proportions. It may seem reductive that the reader has to know the players in a romance up front, but it’s as absurd to have a romance that leaves the identities of the lovers uncertain as it is to have a mystery that’s not sure if there’s been a crime or who the detective is. So if you leave those blank spaces in the text, the reader fills them in. Again, Pam’s take on this:

So the viewers who also write fan fiction, who have identified Felicity as Oliver’s intended, rescue her from her cheating suitor. They pair her with “anyone but Oliver,” including, for a perfect pay-back, Sara. Felicity and Sara both cheat on Oliver–with each other. These fan fiction writers react to the violation of the romance contract by writing scenes that restore romantic justice to the built world of Arrow. But Arrow is primarily about justice of another sort–saving innocent lives, saving the city–warrior justice.

Arrow’s writers have got a lot of courtship possibilities in play for Oliver. And it seems they are perfectly willing to introduce a new romantic element without much set-up: Oliver kissing Sara.

Are they adding characters to the mix, then waiting–not very long in the internet age–to see what the fan base thinks of the reconfigured relationships? To what extent can they violate the romance contract and still keep viewers?

At what point does viewer input make the viewers co-writers of the narrative? That’s the ultimate question.

For me, the writer not the academic, the ultimate question is more practical: at what point does the lack of contract mean that I lose control of the story because the reader rips it out of my hands to make it go in the direction she wants, abandoning my book to dream/write her own fantasies? At what point do I destroy my own narrative by making the teasing of expectation more important than actually telling the story? If I’m going to switch love interests, how much rage can I overcome in my reader to make her invest in the second love interest?

If requiring a contract seems to limit a plot too much, remember that a romance contract is between the writer and the reader, it’s not between the characters; they may not even be aware there’s a romance in their future. That means that both characters in the romance plot can see other people, have other romances (which complicate the arc of the contracted romance), delay acknowledgment of the seriousness of the relationship, pretty much do what they want, as long as what they’re doing doesn’t destroy the future of the relationship that the writer contracted with the reader. Their experiences are part of the romance arc, so the writer has to make sure that those experiences with others move that contracted romance plot, that the things the lovers learn from the other relationships inform the true love story. That means a writer has a lot of leeway even with a contract in place.

Therefore, knowing the contracted love interest on Arrow would clarify the Oliver/Sara kiss because viewers could tie it to the contracted plot; how they’d tie it would depend on who the love interest is. If the writers are abiding by the original Oliver/Laurel contract, they just ended that romance arc; “You slept with my sister twice” is not a segue to a happy ending. If they’re planning long term for Oliver/Felicity, viewers can adapt what’s happening to that romance: Oliver is denying his feelings for Felicity, Oliver is keeping the Arrow team on a professional basis, Oliver hasn’t caught on that he’s in love with Felicity, there are any number of explanations a Felicity ‘shipper can come up with to resolve that action as long as she knows Felicity is the other half of the romance contract. But if they’re planning an Oliver/Sara relationship, they have a problem because there’s no contract; that is, the romance wasn’t foreshadowed in any way that the viewer could say, “Oh, there she is, the other half of Oliver’s romance plot,” so an out-of-the-blue kiss just leads to a general “WTF?” The idea of teasing the reader/viewer with a knowing “wait and see, we have a plan” just doesn’t work in a romance plot. The romance reader is good with insurmountable odds and will wait a fairly long time to find out how the lovers will resolve everything, but she is not good with not knowing what the hell is going on.

Bottom line: To tell an effective romance narrative, you need to establish that romance contract.

243 thoughts on “The Romance Contract”