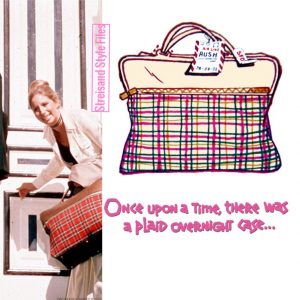 . Lani Diane Rich has this theory that everything in a story has to work all the time, do two or three jobs, or it’s not earning its keep. Since I have the same theory, it tends to crop up when we’re doing the Popcorn Dialogues analyses, but this week, for What’s Up, Doc?, we really bit down on it. (Please note: Massive movie spoilers ahead.)

If you haven’t see the movie (and you should, you should), it’s about a guy named Howard who’s trying to get a grant to study the musicological attributes of igneous rocks. The second scene in the movie is Howard with his humorless, micro-managing fiancee, Eunice (the magnificent Madeline Kahn), in a cab that stops suddenly so that he bangs his head on the red plaid suitcase that holds his rocks. It’s important that the viewer know that there are rocks in the bag, so Howard complains, Eunice tells him to suck it up, and the cab driver makes a “I hate it when somebody touches my rocks” joke. (Why yes this is similar to David and his prehistoric bones and humorless fiance in Bringing Up Baby. It’s an homage.)

The cab has stopped short because a woman named Judy (that would be Barbra Streisand) has walked in front of it carrying a red plaid bag just like Howard’s. END_OF_DOCUMENT_TOKEN_TO_BE_REPLACED