I taught a fiction class in Columbus Saturday (and by the way Columbus, did you have to make Exit 108B unreachable both north AND south? not that I’m bitter), and then I went to Wapak for a family day (Callie is two, can you believe it?), and then I came back and realized they were delivering a refrigerator this morning and the downstairs is still completely torn up so I had to . . .

Never mind. Here are the notes from the class on basics of writing story. I’ll get them cleaned up and put into a PDF later, and they’ll be posted on a section of the website called Class Notes, but for right now . . .

I. The Central Conflict

Every story is a battle.

The story is launched when the protagonist pushes to achieve her goal.
The story is shaped when the antagonist pushes to achieve his goal.
The back-and-forth cause-and-effect pushing and blocking of goals is the fuel for the story.
For the story to have a tight structure and focused central conflict, the actions of both the protagonist and antagonist must directly block their opponents’ pursuit of their goals.

To determine if you have a conflict lock, run a conflict box (thank you, Michael Hauge). 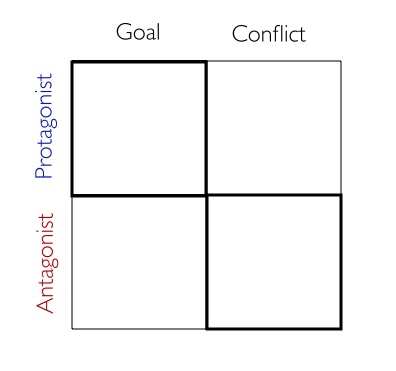 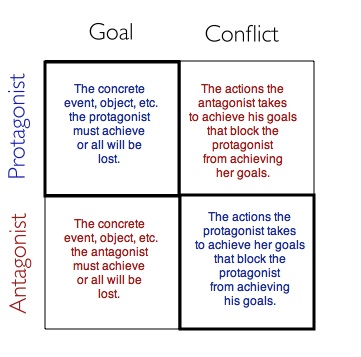 Aristotle: A story has a beginning, a middle, and an end. 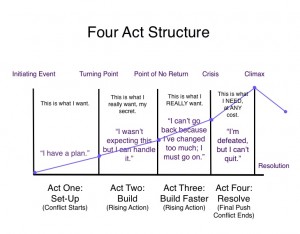 Character Arc Drives and Derives from Plot Arc
Character and plot are inextricably intertwined because who the character is determines the course of action he or she takes, and the actions and consequences of those actions shape the character and change him or her.

1. Initiating Event/The Conflict Begins: The story starts when the protagonist . . .

3. First Turning Point/Conflict Gets More Heated/Stakes Get Higher: The event or action that is the climax to the first act, throwing the protag and antago into . . .

5. Second Turning Point/Point of No Return: The event or action that changes the protagonist so dramatically that she is no longer the person she was at the beginning of the story and that throws the protag and antag into . . .

6. Act Three: An even more desperate conflict, escalating more quickly because of even higher stakes, changing the protagonist even more drastically until . . .

7. Third Turning Point/Crisis/All Is Lost: The event or action that appears to doom or defeat the protagonist, classically the point at which the protag suffers a symbolic death by descending into hell, leaving her with nothing but a last desperate attempt to save her life which thrusts the protag and antag into . . .

8. Act Four: The final fight to the finish, escalating rapidly until . . .

9. Climax/Obligatory Scene/Final Confrontation: The event or action which brings the protag and antag into direct conflict from which only one emerges victorious, after which there is nothing but

10. The Resolution, the Return to Normal, the Coda to the Story.

Write a sentence for each of those, and then flesh it out with necessary, concrete, specific details of plot and character arc in the now of the story (no back story, no character explanations, just STORY) keeping it under two double spaced pages.

III. Theme
Theme is the central idea of the story. It is a full statement, subject and verb, that sums up what the story believes is true about the human condition. It is not a moral, it’s simply a statement.

Begin with “What is this story about?”

Plot (concrete, specific, external): “This story is about a woman trying to save two children from ghosts.”
Meaning (abstract, not a moral): “This story says that connection and family leads to love and salvation.”
Theme (statement about the human condition): “Taking the risk to love and connect leads to salvation and security.”

Theme is developed through character change and plot escalation, not through somebody in the book saying, “You know what, family will sustain you through your darkest time.”

After your first draft, when you have the story on paper with all the emotion and truth you can muster, then you must make it clear for your reader, you must shape it and focus it for clarity.

1. Identify your protagonist and antagonist and their goals.
2. Run a conflict box to see how to tighten and focus the conflict.
3. Analyze your plot for acts and turning points.
4. Cut any scenes that do not move the plot AND show character changes.
5. Title each act so that you can recognize the story it tells.
6. Shape the acts so that they grow progressively shorter, with higher stakes and more tension.
7. Make sure that each scene propels the plot and changes character.
8. Resolve any subplots before the climax.
9. Make your climax the obligatory showdown between protag and antag from which only one can win.
10. Revise the first scene, the place where the conflict starts, so that it reflects/bookends/sows the seeds for the climax.
11. Determine your theme and revise again to subtly reinforce that central idea. Remember, be SUBTLE. No theme-mongering. It’s annoying.

81 thoughts on “The Basics of Fiction”