Lani sent me the step by step pictures of Sweetness’s Kit cake. She used Wilton fondant because that’s what I had, and paste food coloring I think. She should really be doing this post but Lucy March evidently doesn’t do food how-tos, unlike Argh which will do anything because we are completely undisciplined, so here’s Lucy’s “How To Make A Kit Cake” in pictures:

1. Start by going to the Skelanimals site and basking in the glory there. Do not look at the toys, and no matter what, DO NOT LOOK AT THE CLOTHING. The stuff is irresistible. Instead look at the drawings. Select the one you want (Sweetness’s fave is Kit) and pull the design to your desktop. Needless to say, these designs are under copyright and you can’t reproduce them for sale or profit. But for one private birthday cake, I think you’re good. Especially if you looked at the toys or clothing and bought something. Where was I? Right, pick your skeleanimal and drag him to the desktop and then into a Word document where you can resize him to the size you want on the cake. Here’s Kit:

Yes, he’s small, that’s why you put him into a graphic program or word and resize him.

2. Print out two copies of him. Cut out one around the outer edge (all of Kit) and one of just the white interior pieces (the skull shape and the four leg bones). Do not cut out the little toes or the heart shape, you can fake those.

3. Mix the black food coloring into the fondant and knead until its evenly distributed. This takes awhile, but Lani did it, so you’ll have to ask her how that went. Then roll it out so it’s about 1/4″ thick, put the first cut-out (the whole Kit) on the fondant, and cut around it with a knife. Then peel off the paper and throw that away and peel away the extra fondant and you’ll have this: 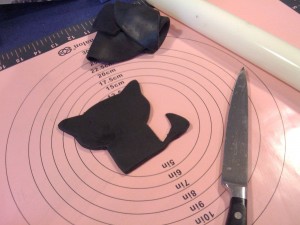 4. Roll out some white fondant and cut out the skull. Cut out the eyeholes and the nose. 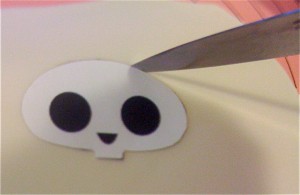 5. Put the skull shape and the leg bones onto the black piece. Shape little balls for the toes and add those. Take a small amount of fondant, mix in red food coloring, divide it into two little balls, flatten, join, and pinch the bottom to make a heart. Add that and your Kit is finished. 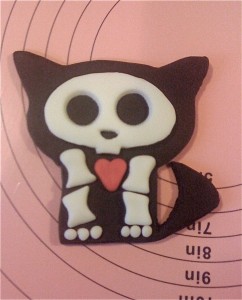 6. Bake your cake. We used two of Wilton’s layer cake pans and as I recall, it took three boxes of mix. Put parchment in the bottom of the pans so the layers will come out smooth on top. We used plain old canned icing because we were lazy, but any white icing works. 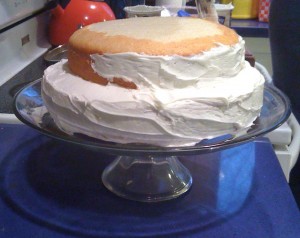 7. We added paper Skelanimals to the sides holding little signs. I took a screen grab from somewhere on the net, put it into Curio (you can do it in any graphics program) added the signs, and printed them out on thick photo paper. Then I cut them out with tabs on the bottom on I’d have something to stick into the cake: 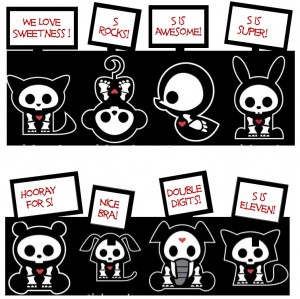 8. Put your fondant animal on the top of the cake, stick the little animals with signs around the edges, and add cool black and white candles from Krogers. 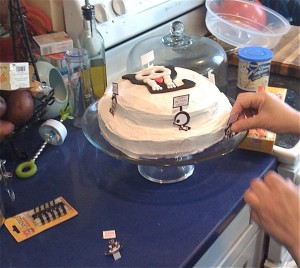 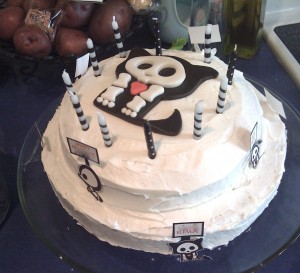 Were I to do it again, I wouldn’t use canned icing, I’d make double the little paper stick-ons, and I’d try to do them in fondant instead of paper. But it worked out just fine for Sweetness, and that’s all that matters. 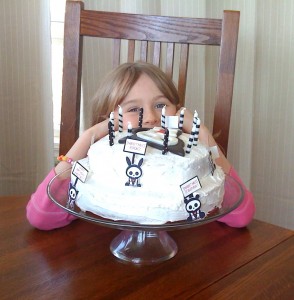