Start with the protagonist always, so that’s Zelda. Zelda’s a tough chick, she’s been making it on her own, and now she’s coming back to where she spent her teen years and all of that is going to swamp her again. But back story can kill a book, so it has to stay in the now, with what Zelda wants now, very modern, and that was always to find out who her father was, a very old-fashioned goal. So tension between classic and modern, old and new. Except the motivation for that goal was weak, I remember that, she wanted to find out who he was because he was her father, not because she needed anything desperately in the now. He’s been a mystery all her life, why does she need to know now? So there’s something I have to think about: Who is Zelda and what has happened now that makes her decide to find her father? She’s also got a simple elegance to her, I think. Very controlled, but underneath very sensual. So how does all of that, of who she is, play into the goal and the motivation and the story as a whole? Because who Zelda is will determine what You Again is.

Then the overall genre, the kind of book I want it to be. My version of the Christie mystery, but still a Crusie. So the big house, people trapped inside by a snow storm, and then they start dropping like flies . . . Actually I’m semi-trapped in my house my snow right now, so this is a good time to do this. So a mystery with a love story, traditional but not. Twists along the way. Sex. Drugs. Rock and roll. A dog. (What was the dog’s name? Great dog. Began with a P. Plum.) But keeping that traditional mystery flavor strong because that’s the backdrop, while not letting the story get strangled in clues and “you’re probably wondering why I call you together” infodump.

.
And then just the mood of the story within the genre, the way it feels as the reader turns the pages. I want it to have a bit of a timeless feel, I think. These people are from three generations, but they’re cut off from the outside world. That’s going to make them a community unto themselves and maybe that will give it that Christie vibe. But it’s still modern, snarky, a cast of contrasting characters. I don’t want a romp or even a comedy; it should be a mystery/romance about people who have good senses of humor rather than zany situations. I hate zany situations.

Then I did what I always do when I’m trying to get a feel for something. I went to visuals, back to the collage and it’s still the book I want to write, but there’s no one thing that stands out, Zelda is just part of the overall story instead of owning it. Which means I need to move Zelda front and center there, and as I remember, that was a big problem with the book. She didn’t own her story. Which makes sense since I haven’t really worked out completely who she is.

.
So I went to myfonts.com and looked at type. Hundreds of fonts, trying to find one that seemed to fit “Zelda,” that felt right for “You Again.” And I found three I liked, Erehwon (yes, that’s the way it’s spelled), Fireside Chat, and Archive Lightface. Then I tried the key words in them to see how they felt. Here’s Zelda: 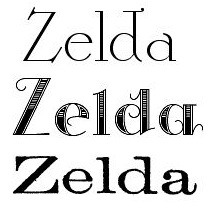 I like all of these, they all feel right for a Zelda, but only one of them can be the Zelda in the book. I like the clarity and the no-nonsense elegance of the first one (Erehwon). I love the sass and personality and the femininity of the second one (Fireside Chat). And then the third one, still elegant but grittier, kicking butt and taking names (Archive Lightface). They’re all serif types and they all have some swash to them (Zelda has swash) but not cute; they have presence. And looking at them, I’m thinking about which one of those Zeldas is going to power my book. I’m leaning toward that last one. She looks like a take charge kind of woman.

.
But she’s just the key to the book, the book overall has to have a feel, so what does You Again look like? I tried it with all caps first: 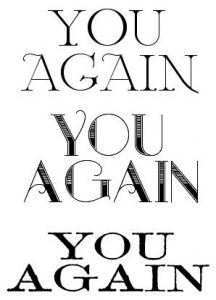 I love the first one. It’s stark but elegant, almost a Gorey feel to it, but still there’s humor there. But that O is staring at me pretty hard; don’t want to do that to a reader. Then the Fireside Chat version, very period looking, very Christie, but not, I think, very Crusie. And then the Archive version that’s practically an assault on the reader.
These are invitations to the book, but they’re invitations to three different books. The first one is modern, no nonsense but feminine, a little sense of history to it, very clean. It’s probably the Crusie-est of the three. The second is just beautiful and fun and very elegant. Maybe too elegant. And the third one says, “Jack the Ripper in the house,” which isn’t far off the truth but may be a little more brutal than I was looking for. They all emphasize different elements that are in the book. The question is, which book do I want to write?

And then to get a feel for the story in general, I did Chapter Ones: 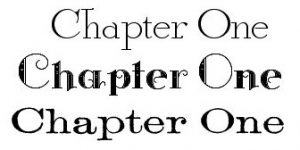 The thing it’s going to come down to, I think, is exactly what kind of story Zelda would find herself in. She’s not in a Fireside Chat story, no matter how beautiful that type is. So is she mostly elegant or a little bit rough? She’s the illegitimate daughter of the former housekeeper: did she work hard to raise herself up in class and inhabit the world she attained, or is she defiantly up front about her blue collar roots in spite of having success in her field? (She was a cookbook writer, I’m just remembering now, but that’s what Agnes is, so Zelda is about to find a new profession.) And is she maybe a different font from her story? Is she such an outsider that I need one font for the story world and one or Zelda? Or do all of these fonts fit, some for supporting characters, some for the story and other characters, and just one for Zelda, the outsider?

So that’s where I am now. Still trying to get a sense of who Zelda is and what I want the book to be before I open that file and get confused by the words I wrote three years ago. Classic. Elegant with snark. Danger and sensuality. And Zelda, taking no prisoners.

I’m thinking here. No point in rushing into anything. I’ve still got the last of the Agnes rewrites to do. But I’m closer, closer . . .

43 thoughts on “You Again: What Was That Story About, Anyway?”