The Twelve Days of Zelda officially began today, so I opened the You Again files.

There are ten thousand of them. The earliest is dated May of 2004, but I know I started it in 2003. I don’t know why I thought I’d open the folder and it would all be neat and tidy. It looks like a goat threw up in there. And although I have many files to open yet, here’s what I’ve found so far:

In a desperate attempt to save this book, I have called Zelda “Emma,” “Esme” and “Roxy.” Her best friend Scylla was once called “Beth.” James, however, has always been James.

I have started this book it three different places, once too late in the story, once too early in the story, and once just in the wrong place. The first scene, which should be Zelda meeting an antagonist, was actually three scenes and a coda: the first scene had 2392 words, the second had 3889, the third had 1384 and the fourth had 241. Yes, folks, almost 8000 words to get my heroine on the scene and in trouble. That’s, uh, too many.

Then the hero, James: 7225 words to establish him and his relationships with his cousins. Yawn.

That one may actually be pretty good, but it’s still going to have to be cut unless I move her to Chapter Two because by the end of the first chapter, I have to have my heroine with her goal and antagonist, my hero with his subplot goal, and something that’s brought them together so I can get the love story subplot going. Which means I now have over 17,000 words for a first chapter. Which is about, oh, eleven thousand too many. So I have to cut it which means that 60,000 word head start I had on the novel just faded to 50,000.

Helping in this weeding out process is some great shareware that I found called Scrivener. If you’re not on a Mac, don’t even go look at it because it’ll break your heart that you can’t have it. It’s a writing word processor that’s only meant for writing drafts of fiction and screenplays. When it’s done, you save it to Word or whatever major word processor you want. But as composing software, it’s great, well worth the $34 they ask for it.

I now have my first chapter scenes all in Scrivener where I can keep them straight with the note card that goes with each scene that I can see all at once tacked to Scrivener’s corkboard which looks like this: 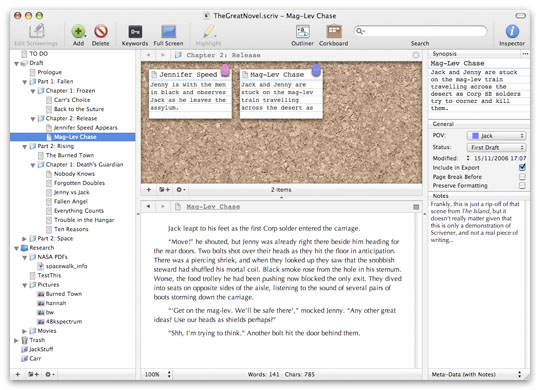 And I have my basic plot outline (Beginning, Act One, Turning Point One, Act Two, TP2, Act Three, TP 3, Act Four, Climax) filled out for Zelda, for the James/love story subplot, for the Scylla subplot, and for two other major characters so I know where there are at the crucial moments. Tomorrow, I’ll add some of the minor characters so I know where they are in their plots at those moments.

Plus I have my One Sentence Idea (Bob will be so proud):

And my “this book is about” sentence (which is easier for me than a One Sentence idea):

This is a book about ZELDA who wants to find her FATHER/FATHER’S IDENTITY but can’t because X is destroying evidence and killing the people who know.

And my central question:

Will Zelda defeat X and find out who her father is?

And yes I did a conflict box. You’re not getting it because it gives away the murderer.

So while I still have a mess on my hands, at least I’m clearing away some underbrush and getting my plan in place. Pretty good or a first day.