I’m staring off the new year with a new e-mail address. Well, I had to. A wireless high speed system finally became available in my area (THANK GOD) and I had to change from my old dial-up provider, so I sent out e-mails to people telling them. And because it was the new year, I sent real e-mails, saying “Happy New Year,” thinking that would be nice, forgetting who was in my address book. I got several invitations to dinner and drinks the next time I was in various cities, that was lovely. I got two requests for book quotes, but I was asking for that one. I got one “you never write, you never call,” but that’s what I get for sending one to my mother. And then there were the ones like my pal, the producer whom I adore and to whom I had promised a story:

Darlin,
Congratulations on your new email address and HAPPY NEW YEAR! Hope 2007 brings you as many smiles and belly laughs as you can handle and that it brings me YOUR SHORT STORY in the first quarter. I can’t wait.
Big, fat, juicy, wet kisses to you.

Hollywood. You can’t trust them to have a moment without a motive.

And then there was my pal on the West Coast. I’m chalking this one up to too much salt in the air where she lives:

“Well, that makes me feel so special that I’m sending you this fabulous new year’s diet tip:” 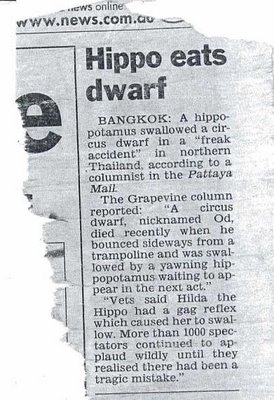 Don’t think about that one too long.

And finally, from one of my favorite authors who is also an award-winning quilt maker and the publisher of a small press. After she thanked me for the new e-mail and wished me a happy new year, she caught me up to date on her life by saying:

Apparently my face is warmer than the feather-bed mattress topper so Critter has taken to just crawling up there and sleeping. Apparently he doesn’t understand that if he smothers me in my sleep that there will be no more catnip: 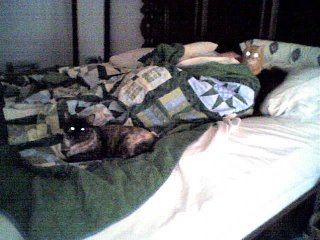 Apparently she has also not realized that both her cats are possessed. I told her I was going to post this on my blog as a Guess the Author Contest (made her scream in e-mail), but then I realized I’d have to mess around with tabulation and mailing prizes, so this is just here for your pleasure. In fact you can try to guess all three, although that first one is going to be a stumper. (Hint: he was working as an agent when we were in Maui a couple of years ago).

So this’ll teach me to send out change of address notes. Next time, they can just find me on their own. But I did laugh.

I have such great friends. There’s a resolution: Take very good care of very good friends in 2007.

21 thoughts on “My Address Book, the Dark Side”