I’m cleaning out my office and I’ve reached the Pleistocene Era. Well, I’ve reached 1977 when I was still married and Mollie was a toddler and I took a class on writing and illustrating children’s books at Hartwick College in Oneonta, NY, one summer, writing on a TYPEWRITER, for God’s sake. I think I realized fairly early on that kids’ books were not going to be my forte, because the story I wrote . . . well, let’s just say it clearly was an early Crusie and not an early “Goodnight Moon.” And because I know I’ve neglected this blog shamefully, and because I don’t have either of the real blog posts done that I wanted to post here, I thought I’d show you the earliest Crusie. It’s called

(Helen was a pal in the class with me. Wonderful sense of humor, terrific artist. Wonder whatever happened to Helen? Something marvelous, I hope.)

Where was I? Right:

Helen was the coolest little rabbit in the forest. She had big velvety eyes and a cute little moist pink nose, but so did all the other little rabbits. What set Helen apart from the crowd was her insatiable lust for ice cream. 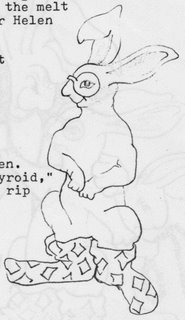 Helen’s mother warned her. “You’re going to get fat, Helen,” she said. “And sick. And your fur will break out. Nobody will want to go out with you. Eat some greens, Helen.”

Helen’s father warned her. “You’re going to hell in a sugar cone, Helen,” he said. “You keep hanging around all those seedy ice cream parlors, you’re going to take up with a bad class of rabbit. Eat some fruit, Helen.”

Helen took to hanging out around a particularly good trash basket outside Mother McClean’s House of Calories. On a good day, she could salvage two sundaes, a malt, and half a dozen cones before the melt got too bad. Every day was Sundae for Helen until the day she met Firebolt.

Helen first noticed Firebolt when he began hanging around her trashbasket one day. It was hard not to notice Firebolt. He was a foot taller than all the other rabbits and he wore a black leather jacket and swung a bicycle chain. 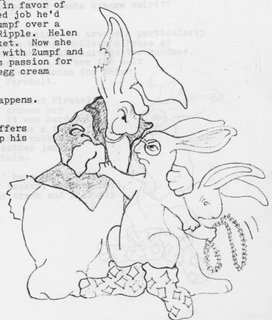 “This is my basket, hyperthyroid,” Helen said. “Poach on my trash and I’ll rip your nose off.”

“Obviously, you are unaware of my identity, kiddo,” he said suavely. “I am Firebolt the Thunderbunny, and this is my slave, Zumpf.”

Behind him, a small brown rabbit waved at her nervously and nibbled his lip.

“I don’t care if you’re the heir to Baskins Robbins,” Helen retorted. “Touch my basket and your face will be shorter by a nose.”

“Here.” Firebolt handed Zumpf his bicycle chain and Zumpf began to swing it for him. He put his paw around Helen’s shoulders. “You still do not understand, my sweet,” he said. “Let me take you away from all this. Return with me to my pad in the storeroom of Mother McClean’s and I will feed you ice cream that will blow your argyles off. Have you ever,” he whispered in her ear as he stroked her soft furry shoulder, “tried rum raisin?”

Firebolt took her back to his place and plied her with rum raisin and Harvey Wallbanger sherbet. From there it was just a short step to egg creams and ruin.

Helen’s argyles ravelled and she got fat. Firebolt dropped her in favor of a little black spotted job he’d found arguing with Zumpf over a discarded raspberry ripple. Now she plays cribbage there with Zumpf and waits with a hopeless passion for someone to pitch an egg cream at her.

Moral: If someone offers you an egg cream, rip his nose off.

Okay, like I said, it was almost thirty years ago, and obviously I was not cut out to be a children’s writer (or illustrator), but I can see the echoes of my later work. Helen is clearly the prototype for the Crusie heroine–angry, rebellious, and starving with interesting footwear–and I can see the genesis of my heroes in Firebolt the Thunderbunny, but I have no idea where Zumpf came from. Or went to. Or why the argyles. Really, I have no idea where any of it came from. I hate egg creams. Oh, and I apologize for egregious use of speech tags and adverbs, also for headhopping there with that soft bunny shoulder bit.

And now back to cleaning the office. God knows what I’ll find next.