So I went to DC, alone, which I do not like because I’ve gotten used to traveling with Bob “Let Me Carry That Bag For You” Mayer, although I coped because it’s only a three day trip and I have my bright new cheerful red Vera Bradley carry-on and it has wheels. I’m thinking that may be my new criteria for what I will let into my life: Cheerful and on wheels.

For example, when I got to the hotel, I had Chinese food delivered because Chinese food makes me cheerful–my potsticker obsession is well documented–and it arrives on wheels, or at least I don’t have to go get it or, god forbid, cook it. Then there’s Tivo, the greatest invention since the internet; because of Tivo I can watch My Name Is Earl (cheerful) any time I want (on wheels). And of course there’s great reading in portable paperback, like Terry Pratchett. My favorite character from Pratchett is Susan, I would very much like to be Susan, but if I’m being completely honest here, the Pratchett character I’m most like is The Luggage, described at the L-Shaped Space website as “probably the most homicidal travel accessory in the world . . . . Philosophers at Unseen University have for some years debated the point of whether the Luggage actually thinks, or whether it merely feels. The remainder of the University long ago came to the conclusion that it simply eats.” Since I began my diet on January 1, I’ve gained six pounds. I simply eat a lot.

The day of the speech, I left the hotel early so I could scope out the Smithsonian because somebody wanted a picture of the puffy shirt, and the day was so gorgeous and the architecture was so amazing that I thought, “Well, I’m loving DC,” and then right in the middle of it all, while I’m walking through this pretty little park, I look over and see an obnoxious shiny black limo surrounded by guys in black suits and sunglasses with little earpieces in their ears. Well, it’s Washington, so no big deal, but I started thinking, if I lived in DC, I’d buy a shiny black car and get my friends to wear black suits and sunglasses and put one earbud of their iPods in whenever i traveled. I have friends who would do that, no problem. Gaffney, Brooks, Ramsland, Saul, Stuart, Dreyer who would insist on being armed, and Mayer who refuses to go armed. Doesn’t like guns. Always cuts himself on knives. So I’m thinking maybe that’s what all these guys are, just some goofball and his pals playing games, and then I turn around and I’m in front of the White House. Which doesn’t mean it’s not a goofball and his pals, just that it’s probably an official goofball and his FBI pals. And you know, they have wheels but they don’t look cheerful. So I discarded any plans I had to go into government work.

The White House itself was a disappointment, small and kind of shabby. Plus I’m househunting again and I have a real eye for windows, and I’d swear those puppies were single-glazed. Maybe not, maybe they’re bullet-proof, but it looked cold in there. And I decided if they put the White House up for sale, I wouldn’t even call the realtor to inquire. Congress, on the other hand, remains impressive. Well, the building remains impressive, and wouldn’t you think the people inside would try a LITTLE harder to measure up to the architecture? And then there’s the Washington Monument. Every time I see it, I think that if it was the Clinton Monument, the jokes would never stop.

Where was I? Right, crossing the mall toward the Smithsonian which is freaking amazing, by the way. The American History museum has, besides the puffy shirt and the ruby slippers, Julia Childs’ kitchen, and I’m pretty sure Cousin Russ had eaten there. Before it was in the Smithsonian. Anyway it’s a great kitchen, no granite, no cherry wood, just warm and bright and well-used. A real kitchen. Cheerful. And evidently on wheels since it was moved to the Smithsonian. My kind of place. Then I went through the sculpture garden–they have a station from the Paris Metro there, my absolute all time favorite piece of Art Nouveau RIGHT THERE, and then a couple of yards away Oldenburg’s Typewriter Eraser, so I had to pause for a few minutes while my head exploded with pleasure–and then I went on to the National Gallery and let me tell you, that’s a nice little art museum the country has there.

I wandered through it without a plan which was perfect for that kind of day. The Cezanne exhibit is up–every time I think of Cezanne I think of what he said about Monet–“He is only an eye, but what an eye!”–and wonder if anybody will ever say, “That Crusie, she was only dialogue, but what dialogue!” and then I realize I’m being conceited again–and you know, Cezanne just does not do it for me. He paints like literary fiction. So I wander around in the nineteenth century because that’s my century, both as an art major and a lit major, and hit this huge painting called “The Favorite of the Emir” by Jean Joseph Benjamin Constant. And I thought, “My God, that’s Liza and Min!” Turns out I write like a nineteenth century painting. Well, here, look for yourself, although this is not a good reproduction because the colors in the original are really electric, gorgeous rich cadmium reds and golds and deep ultramarines: 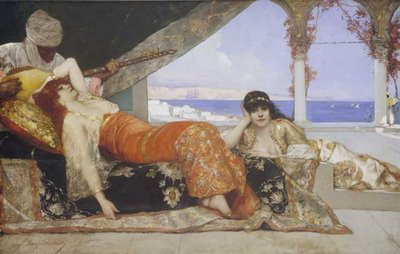 I love the look on Min’s face, particularly given the title of the painting. You know exactly what she thinks of the Emir.

I stayed until the museum closed and I had such a great time just walking around discovering things, and the day was so beautiful and it make me think that maybe sitting in front of a computer screen making things up was not a cheerful, moving way to live. Of course, that’s how I pay for dog food for the herd, so I can’t give it up, and I wouldn’t want to give it up, but I thought that maybe what I needed was to lift my head up now and then and participate in the positive and portable, the things that keep me happy and moving and light on my feet. I figure this is right up there with “fluid and unpredictable,” my former mantra and one which has led my near and dear to refer to me as erratic and irritating, but hey, it’s my life.

Where was I? Right, the Smithsonian. So I went and did the program, answering the softball questions Pam Regis lobbed at me (and what a sweetheart she is) and met some lovely people, and then Kathy Seidel said, “Come on, I’ll drive you to dinner,” because I was eating with a bunch of WRW people and I love that chapter so everything was good. Except Kathy couldn’t remember the address of the restaurant. (I’m skipping over the part where she made me walk across a field in kitten heels because it would be tacky and ungrateful of me to mention it.) So for the next hour, Kathy and I crisscrossed Washington while I made wisecracks and laughed really hard and she made wisecracks and illegal U-turns that put us in mortal peril (“They’re legal in DC,” she said, “Was that a cop?”). At one point I said, “It’s all right, I’ve lived a full life,” and she said, “Oh, good, shut up,” and then I said, “It would have been nice to see my grandchildren though, assuming Mollie ever has any,” and then she said something cruel and started to turn the wrong way down a one way street, and I said, “NOT THAT WAY, NOT THAT WAY!” and then laughed until I cried. Shortly after that, I started to sing about Charlie on the Boston Transit and Kathy, of course, joined in because she is a woman after my own heart, and I have to tell you, getting lost in DC with Kathy Seidel was the most fun I’ve had since I went to Cocoa Beach and saw the clams. Dinner was great, too, we did finally get there, but driving through DC laughing with a pal is the best.

I’m telling you: Cheerful and on wheels. That’s my next tattoo.

23 thoughts on “Cheerful and On Wheels”