At 3:30 AM I finally finish a really bad Agnes scene, but at least it’s finished, and then I read ahead to Bob’s next scene and he’s done the exact same things. And I turn to the e-mail computer to tell him it’s his fault so he knows when he wakes up in the morning, and before I can hit send, I’m getting e-mails from him, which he’s writing thinking I’ll be getting them when I wake up.

So at 4 AM, Bob and I are arguing about what the hell happened that we got our signals crossed (except now I know it’s my fault for not reading ahead first). And we have a phone interview to do at 11 this morning, so we really need to get to bed. But instead, we type at each other. We really need to get lives.

And of course, in the meantime, Mare languishes. And tomorrow I head for NYC where I’m not positive I’ll have an e-mail connection. So possibly this was not the best time to do the 12 Days of Mare.

But at least here are the answers to the Mare questions that I’ll be giving Eileen and Krissie:

Hair:
Dark brown, almost black, with navy streaks in it, the kind you can’t see until you’re up close. Yes, really navy, she added them.

Favorite Music:
Working on this. Back to you later.

Favorite attire choices:
Vintage stuff. White poufy prom dress with the bottom eighteen inches of the crinoline cut off so people can see through the bottom of the skirt, worn with a black cardigan and black heart-shaped sunglasses with rose-colored lenses, black flats. Plaid school uniform skirt with white tank top that says “Mother’s Tattoos,” knee socks, Keds. Black capri pants with black flats and a Mickey Mouse baseball shirt (the kind that buttons up the front). Levis (regular cut) with white lace camisole and white chenille jacket made from her bedspread from when she was a little girl with a large Cinderella done in chenille that was the center medallion on the bedspread on the jacket back. 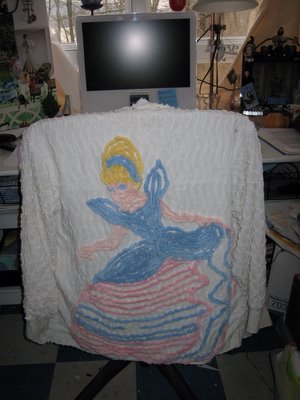 What their room looks like (something as a place setter, even, if you
don’t know yet):
Since they move so much, she keeps every room the same. She’s been buying up vintage curtains for years, so she just hangs them from the walls in every room she gets. Most of them are in blues and greens and lavenders, in velvets and silks, and a lot of them are worn and motheaten, but she hangs them in folds so you can’t tell. Her room always looks like an underwater tent. She has a iron day bed with curlycues on the ends, and she has it covered with a bedspread she’s had since she was a child and there was money, a beautiful stripped silk coverlet in gold and blue and lavender. Lots of gold and green and blue and lavender and black velvet, silk, and satin throw pillows she’s found at Goodwill or thrift stores or made from curtains that were too worn to hang. Lots of them. A big cushy purple pillow on the floor in front of the window for Pywackt, so he can sleep in the sun during the day. At night, he sleeps on the daybed with her. The bedside table is more wrought iron, an old outdoor table she sanded the rust off of and painted lavender. Her lamp is pink glass and it has a gray silk shade edged with pink feathers. The rug on the floor is an old oriental, navy faded almost to gray. Holes in places. She pins pictures from magazines, posters, etc to the hangings on the wall, changing them out when she gets tired of them or they’ve completed whatever thought she hung up there to inspire. Her one extravagance is South American nichos of the Virgin of Juquila, little homemade shrines that she buys on eBay. She has six of them, including one big one that wiped out a week’s salary. She calls her Biggie J and adds a flower (silk) to the shrine whenever she wants something really important. 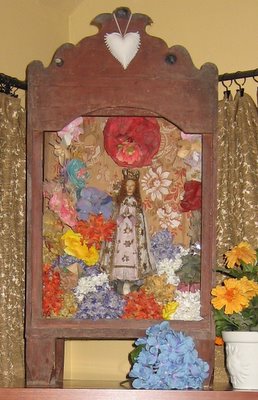 She doesn’t have a bureau, just stacks of old suitcases that look like freeform bureaus that she’s collected over the years. Her favorite is a complete set of sixties pink luggage, but most of it is forties mid-sized suitcases in the yellow-brown color that was popular then. She has one big reading chair that she dragged home from Goodwill and patched over the years with pieces of curtain material so now it has a custom patchwork/crazy quilt look, all in those deep water colors, plus she adds anything else that catches her fancy now: weird buttons along the sides, scraps of lace and doilies. She learned to transfer photos to fabric, and she’s now thinking of how she can put the family photos on the back, like a gallery. And last year she added a big footstool which is in the process of being recovered, too. She has books and notebooks and sketchbooks and CDs scattered all over, but her Mac laptop is always stowed carefully under her bedside table. Her iPod, a Christmas present from Dee and Lizzie three years ago, is always with her. And she lines her shoes up along the baseboards of whatever room she’s in, so she can see them in all their glory, although her shoes are nothing compared to Lizzie’s. Sometimes she goes into Lizzie’s room just to stare at the glory that is Lizzie’s shoes.

Idiosyncracies(besides the obvious)(bite nails? pick nose?):
Bites her upper lip when she’s stressed
When she loses control of her emotions, things move, so she crosses her arms and hugs herself a lot, trying to keep everything in

Method of transport:
Walking. She walks everywhere because she needs to see everything. Mare really is about the journey, not the destination.

Magazine subscriptions:
Can’t. Too easy to track them down. But she buys The Week every week.

Favorite Book:
The Uninvited by Dorothy McCardle. After that, anything by Terry Pratchett.

Favorite TV Show:
Buffy reruns and Veronica Mars, although she has a real fondness for My Name is Earl.

Pet, Familiar:
Pywackt, a cat who used to be something else until Lizzie sneezed at the zoo one day.

Favorite Muppet:
Kermit, although Animal holds a place dear in her heart.

The thing she’d never do:
Lie.

The thing she’s always wanted to do:
Spend money like it was water. Clothes, fabric, books, art supplies, anything she wanted, just buy it, even though she knows she ends up with better stuff when she has to work for it and make it herself.

Childhood toy that’s still in her room:
A stuffed green velvet frog with gold filigree patterns and a gold crown on its head. She kisses it nightly. Hope springs eternal. 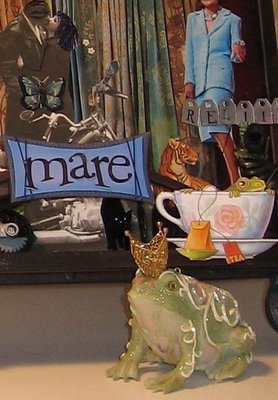