So I’m at The RWA National Conference in Reno last July, and Eileen Dreyer (one of my favorite people and also I’m in love with her husband Rick which is why she calls me “Mormon Wife”) sits down beside me and says, “I have the best idea for a book. The heroine is a shape-shifter but she’s a virgin because every time she gets excited, she changes shape, like into the guy’s mother.” And I said, “How much have you had to drink?” and she said, “Enough,” and we talked of other things. Fast forward a couple of months and she e-mailed me and said, “Here’s the idea: Three novellas, three sisters, all with paranormal powers that they can’t control. I do my shapeshifter, Krissie does one [that’s Anne Stuart], and you do one. What do you say?”

And then it turned out Jen Enderlin was in, too, so now sometime in 2007, The Unfortunate Miss Fortunes (working title but hoping it will be permanent) will be published, which means I’m now writing the youngest sister, Mare. (There are three sisters: DeeDee, Eileen’s shapeshifter; Lizzie, Krissie’s girl who changes the shapes of other things; and my girl Moira Mariposa, better known as Mare, who moves things with her mind. Psychokinetic? I know there are terms for all of those powers, but that’s what they do.) So I’m figuring I’ll try to do Twelve Days of Mare and see what I get.

BUT I also have to do Agnes with Bob because I can’t keep him waiting. And I can’t delay Mare because Krissie and Eileen and I are meeting in New York for three days to talk this through, and I need to get a chunk of it done before then so I know what my story is about because I don’t really know what I’m doing until I see what I’ve written.

So here’s the plan: I’m going to dedicate an hour to Mare every morning. Afternoons and evenings are for Agnes, but the mornings belong to Mare. Since my mornings are really short–I usually start work about ten–and I have to answer e-mail in there, too, it should work out to about an hour a day, although it’ll get trickier once I’m on the road. Twelve days starting tomorrow ends the last day we’re in NYC, so that should make things more interesting. January tenth is going to be tricky because I’ll be traveling plus that’s Mollie’s birthday (she’ll be twelve) and we’re going to do the NYC thing, which for us usually means a great lunch and a walk through Central Park where we talk a mile a minute, but . . .

Where was I? Right. The Twelve Days of Mare starts tomorrow. As with Trudy, the posts will be short, just a way of keeping me honest and on task and probably not very interesting, so be forewarned. And if you want to know how Agnes is doing, schlep on over to He Wrote She Wrote, because that’s where we’ll be talking about that. About once a week.

Meanwhile, here’s the start of the Mare collage. It’s only the very beginning, but I’m liking it. 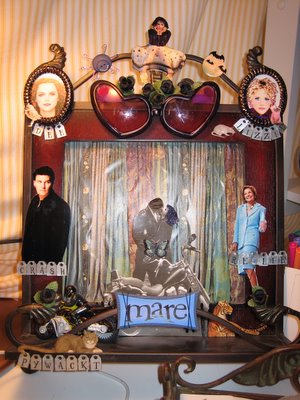 And now, back to Agnes.