I made a lot of New Year’s resolutions last year and I can’t remember any of them which is good because it cuts down on the stress. But this year, I’m getting SERIOUS about this stuff. So I’m going to make a public record, thereby opening myself to ridicule and pity if I don’t follow through. So here goes:

In 2006, I will finish at least one novel and one novella. No, really.

In 2006, I will lose twenty pounds. I’ll still be overweight, but twenty pounds is doable. And I’ll be healthier. 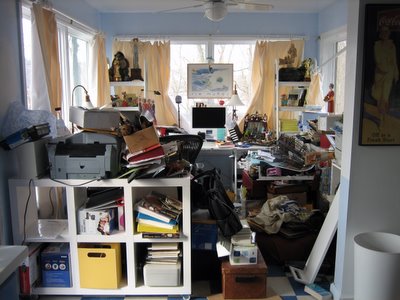 And this is my desk: 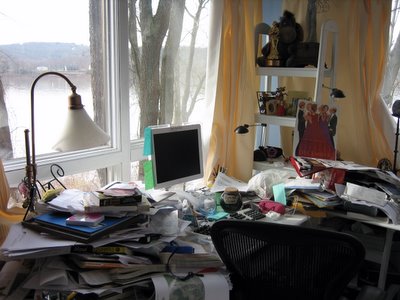 I’m showing these pictures to shame myself into getting this done. Then I can post the pictures of the nice clean offic. A goal. So I’ll do it today. Well, I’ll start it today. I have to write in there (see Resolution One).

In 2006, I will stop trying to do everything at once. Patience, grasshopper.

Five things. That’s plenty. Especially since I just survived the December from Hell, so while I am sure there’s nothing but good times ahead, I’m not going to shoot too high for 2006. Survival, that’s my overall resolution.

Start my 2006 Journal. I’ve started at least two dozen journals in my life and I always end up wandering off, but this year, I’m keeping one so I can write down all the stuff I delete from this blog because it would get me in trouble. I didn’t put it in the year resolutions because any more than five resolutions is masochism, but goes here. Just try it for a month, Crusie. Nobody will ever read it, so you can just jot things down. No stress.

Start the Dueling Blog for the Don’t Look Down Tour, which is now called He Wrote She Wrote. We actually started it this morning, so that’s one off the list.

Work on Agnes and the Hitman. Today, I’m going to concentrate on one of the supporting characters, Baby Dupres, and try to write a couple of her POV scenes, rough drafts. She’s only going to get about 10% of the book, if that, so if I can get her down on paper, Bob can write her into his scenes. And so can I. I don’t really know who a character is until I see what I write. So today, in the time not spent cleaning the office, I will find the keyboard to my big computer and write some Baby. To let you know how bad this is, I still don’t know if she’s a Southern belle or a mob wife. At the moment she’s a Southern belle mob wife, but I’m not sure I can pull that off.

Work on Mare, the novella heroine, because I am heading to New York in ten days to meet with the other two authors of the anthology. More about that later because that one deserves a whole post, especially since I’m going to be doing the twelve days of Mare here shortly. Only not two thousand words a day. Especially since I’m writing Agnes. Okay, that grasshopper resolution needs some work.

Lose five pounds. This will involve exercise which is difficult because I can’t write while I’m on the treadclimber. I’ve tried it, it doesn’t work, I almost killed myself when I stopped to stare into space, trying to think of the right word.

And somewhere in there, I should get the proposal for Charlotte done, but I’ll be damned if I see where.

So there, I’m on the record, now I have to follow through. Probably. I’m starting after I make pork and sauerkraut for lunch because it’s good karma for Germans. I have no idea why, but thanks to my mother, I’ve been eating pork and sauerkraut on Jan. 1 for 56 years, and things have worked out pretty well, so I see no reason to stop now.

Here’s hoping your resolutions are good ones (eat more chocolate, get a puppy, say something nice to yourself in the mirror every day), and your 2006 is terrific.