So I made a collage for the Trudy novella, which I am stubbornly calling “Hot Toy” even though I’m pretty sure my editor is going to change it, and which is going to be in an anthology called Santa Baby, out in 2006. I did it this week because I’m heading for the Surrey Writer’s Festival this weekend where I’m giving a talk on collage as brainstorming for fiction, and I needed pictures to illustrate it. As craft topics go, this is the one that makes Bob twitch, so I’m not even going to discuss the huge box of stuff I have for the Agnes collage.

(Agnes and Shane are the hero and heroine of our next book. Agnes writes about food. Shane kills people for a living. Bob does the outline and blocks all the scenes out on a spreadsheet. I do the collage which he doesn’t want to see. Then we both write the book. Well, it works.)

In the past, when I’d start thinking about a book, I’d tear out pictures and stick them around my computer to remind me of the world I was creating. Then some friends—Jo Beverly, Barbara Samuel, Anne Stuart, Susan Wiggs—started talking about collage and I thought, “You know, I used to love collage. I should do that.”

And then I lost my grip.

Long ago, I was an art teacher. That doesn’t leave you. And collage was always my favorite medium. So twenty years later, I got a piece of foam core board and start gluing things on for a book I was writing called You Again, and then I thought that since the book takes place in an old house, I should really put a roof and some walls on it, and then there was a stone terrace and, well, one thing led to another and I sort of built the house and then went nuts filling it with stuff and it was a huge help on the book (especially now that I’m going back to it after a hiatus of a year) and I will never again do another book without a collage.

I did a small collage for Bet Me (if you want to see it, go to the Bet Me page on the website) and a big one for Don’t Look Down, and then this week, as part of the collage presentation and also as part of writing the novella, I did the Trudy collage. As usual, it got out of hand.

I started with a really beat-up, splintery shadow box that I’d found in the mark down bin at Hobby Lobby. It was full of pseudo-Italian stuff, wine bottles and bread and yellowed posters and a corkscrew that was a real bitch to get out of the box because they’d screwed it in. I ripped out all that stuff and put it in the Agnes box because the Agnes book is about the Cincinnati mob. Yes, Bob and I know there never was a Cincinnati mob. That’s why they call it fiction, folks.

And then I had an empty, even more splintered shadow box. I liked that because the first image I had of Trudy was walking through this very old, dark toy store that had splintery wood shelves. I decided the box part would have the plot imagery—antagonists, goals, plot points, setting, motif and symbol, theme—and the frame would be Trudy. It worked really well until, as I said, I lost my grip.

There are two parts to brainstorming with collage. One part is gathering stuff, and that goes on for a long time. I’ve got boxes for four different books and another novella started, so whenever I see things that look like those books, I throw them in the box. This is easier than ever since the scrapbooking craze hit. You wouldn’t believe the great stuff you can find in craft stores now. And then there are magazines and catalogs, and of course, the Internet. And Goodwill. You know that big table full of miscellaneous little toys every thrift store has? Pure gold. I found a lot of stuff for Trudy, but I told myself I wouldn’t use all of it—it’s a small shadow box—but I’d collect all of it so I could pick and choose later.

The second part comes when it’s time to start the book. You lay the pieces out and construct the background and figure out what the structure is going to mean and start gluing stuff down. And as you glue things next to each other, they take on new meanings and give you more of the story, making visual connections. I can practically hear my synapses sparking when I glue the stuff in. So I started gluing things in for Trudy. and I couldn’t stop, and I put it all in and then got more, and now both the box and the frame are jam-packed full of stuff from the story, and it’s exactly right because this collage feels to me the way Christmas always feels, too dark, too loud, too crowded, too bright, too busy, and yet, you have to love it.

So when I get back from Surrey, all I have to do is play the four different versions of “Santa Baby” that I have on my iPod while looking at this collage, and I’ll know how to finish the novella. It’s all right there.

And because I did the twelve days of Trudy with you, I’m putting it all right here: 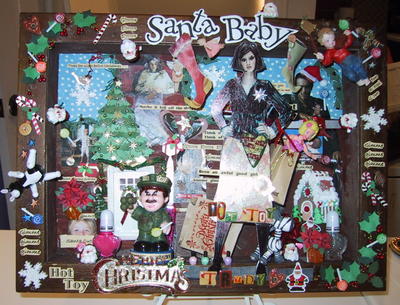 Bob will undoubtedly post something snarky here, but I’m telling you, this works.