I don’t remember my early stuff being this bad, but then all I remember from early stuff is the final drafts. And once again, I’m writing 95% dialogue, which I was hoping writing with Bob had broken me of. Radio plays, I should write radio plays.

I like these characters, I just don’t believe them. They’re perfectly nice people, except for the bad guys who do have motivation for being Bad, but I don’t believe they’re real, I’m not worried about them, there’s no blood in their veins, no juice in their scenes. I feel like I’m typing instead of writing.

So tomorrow, I’m definitely putting in time on the collage. I used to just paste pictures and put things from the books around the computer, but people like Jo Beverley and Barbara Samuel and Susan Wiggs kept swearing by collage, gluing the pictures down together, so I thought, “What the hell?” and I tried it. Amazing process, which I immediately lost my grip on, of course, and did these elaborate things, but they work, so I’m good with it. The idea isn’t to illustrate the story, it’s to glue together pictures and objects and words that create the mood of the story so that you can look at it and be sucked back in to that place and time. People usually scoff in the beginning, but then they try it and they’re hooked on it. Well, female writer people. Male writers tend to resist it with every fiber of their beings. At least the male writer I know. But I digress.

So I had this old shadow box that I’d saved for a future collage, and while I was daydreaming this book, I thought of it, and it fit that old toy store the story opens in. So I took the glass out of it and chipped out all the ugly crap the store had glued in and started collecting the Stuff. In this case, the Stuff was pictures from an Anthropologie catalog because their models always look so annoyed (conflict), and a bunch of Christmas stuff including a cherub with a violin, and a toy policeman from Goodwill. There was one sulky model slumped on a couch that looked like Trudy’s sister, except her hair was too big, so I cut some of it off and put that in the background of the box. And there was one model who looked mad as all hell, but she was too skinny so I glued some patterned paper on her for a wider skirt and colored her jacket with markers to thicken her waist. And I tried to fix her face with markers, too, but she’s still too damn skinny. I blame Kate Moss. So I’m looking for a new head for her, and in the meantime, I’ve cracked the wings off the cherub and painted it to look like a little boy in jeans and a red T-shirt for Trudy’s nephew Leroy, and I painted the policeman toy in camoflage so that it looks like the insane war toy doll, Major MacGuffin, right down to the artificial raspberry I painted Army green to look like a grenade.

Yes, I am insane, what’s your point?

My point is that if I can get these visuals in here, I can start to get a grasp on the book. And then as I glue things down, relationships become apparant, and motifs, and the story starts to organize itself. I’ve done them before (if you want to see them, they’re on the website under “Fan Trivia”) and they always help. And this one is so early yet, it’s missing so much stuff, that I’m thinking maybe tomorrow, I’ll work on that before I try to write more. 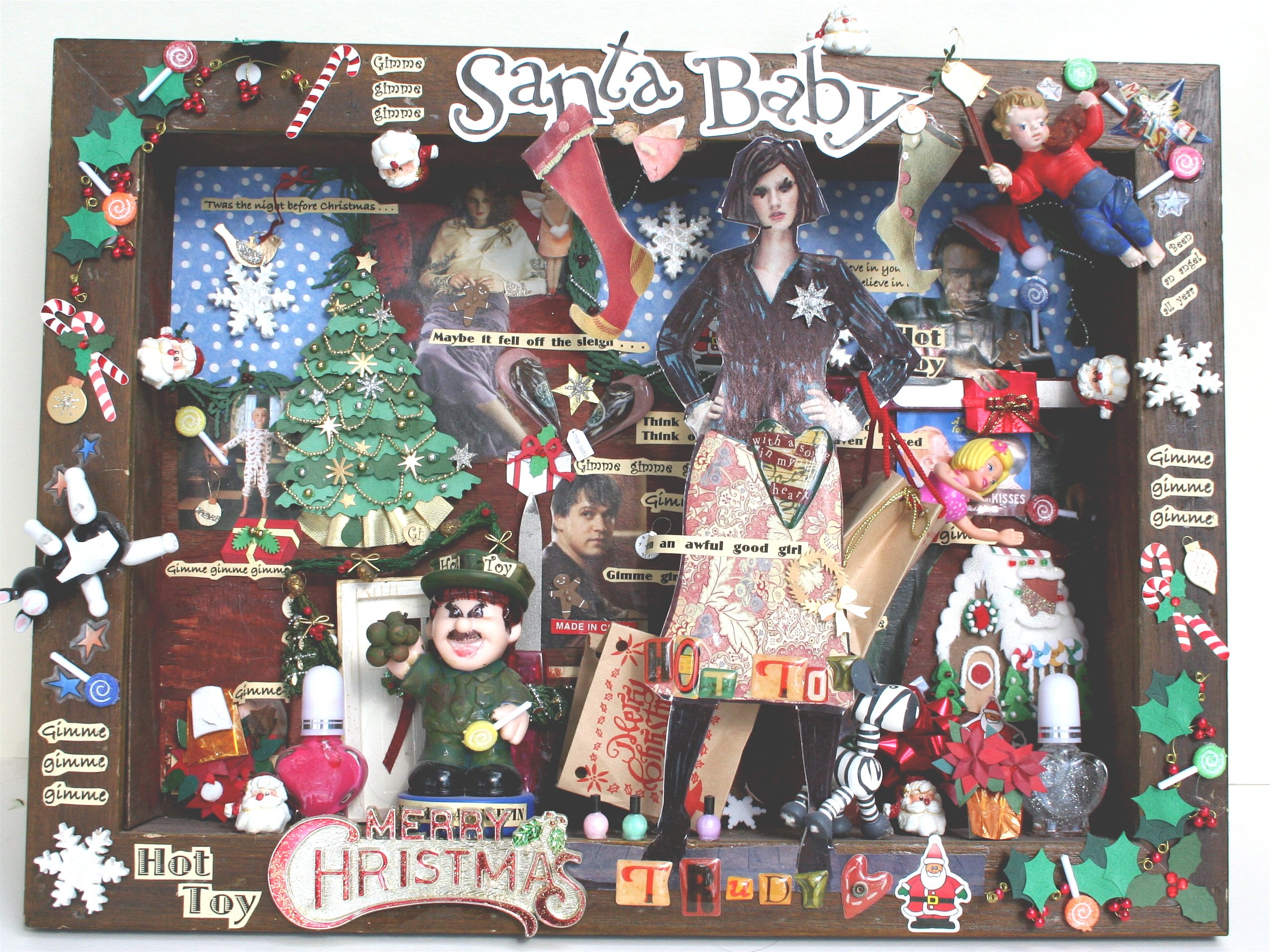