Our own Jeanne Estridge has a new book out October 4th: The Demon’s Secret Baby!

Passion, revenge and a night destined to overturn the power structure of Hell…

Samael, Demon of Pride and Devil’s Advocate, rarely leaves Hell. He has everything he desires there—except his ex-wife. Their divorce was inevitable for both their sakes, but eons later he still burns for her—and Lilith still loathes him. Now an Aboveworld assignment forces them together for three weeks. His powers of persuasion are legendary. If he can’t have her for eternity, twenty-one nights will have to do. 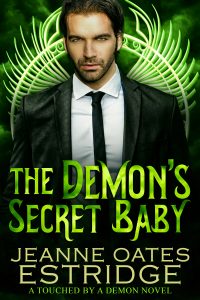 Over the past ten thousand years, Lilith has clawed her way to the top of Satan’s Operations staff. Aboveworld assignments are her get-out-of- Hell-free card, allowing her to escape her history as the dust wench who married into Hell’s elite and then got dumped. Her next assignment is as assistant to the Demon of Pride himself in her favorite stomping-ground, the Big Apple. She’ll never get a better chance to even the score.

Sam’s determined to seduce his beloved. Lilith’s out for revenge. Sparks fly, and a moment of weakness yields consequences that could upend the universe.

Bio:
Jeanne Oates Estridge is the award-winning author of the Touched by a Demon books, a series of paranormal romantic comedies set in a Hell that’s a cross between Dante’s Inferno and your average American corporation. (This may or may not have something to do with the years she spent working in IT for Fortune 1000 companies.) When she’s not imagining a business whose divisions include, Sloth, Greed and Lust, among others, Jeanne loves to hike and to photograph birds and wildflowers. She lives in a 99-year-old house with her husband and a pair of teenage grandkids.

Jeanne Estridge
Visit me at www.jeanneestridge.com
Author of the Touched by a Demon novels
The Demon’s Secret Baby , available on Amazon  October 4

I don’t watch a lot of TV, not because I don’t love TV, I do, but because I’m all caught up in other things right now, mostly books. I do prefer books. But every now and then I trip over a TV series I didn’t know anything about that’s really good, that makes me think about the stories it tells and the characters it builds over the long haul. I didn’t find Leverage until it was over. I found Person of Interest midway through the second to last season. The Art of Crime purely by accident. And this week it happened again, a British detective series (come on, nobody does mystery like the Brits) that had one of those unlikely partnerships that evolved over three short seasons into something really lovely, not a romance but a real partnership between two people who value each other, all the while telling nicely twisted mysteries. This week McDonald & Dodds made me happy.

How did you tune into happiness this week?

We’re closing in on the end here, ready to go to paper edits on Lavender and Pink and then Vermillion once we get the last of it done, and I’m starting to think about taglines.

My favorite is from The Royal Tannebaums: “Family isn’t a word, it’s a sentence.” I love that for so many reasons, not the least of which is I’m obsessed about families in my writing. My favorite one for my books is one the publisher wouldn’t use. It was “Fast Women: They don’t break for anyone.” They said it was because people would think it was misspelled. I disagreed but they went with something else. They took “The Unfortunate Misfortunes: There’s magic in the night.” I liked that, simple and to the point while describing the book. And then there were “Tell Me Lies: You can go home again. You just can’t leave,” “Welcome to Temptation: Population 2,158. And falling,” and “Faking It: What’s reality ever done for you?”

And now we have this trilogy. END_OF_DOCUMENT_TOKEN_TO_BE_REPLACED

The Golden Enclaves landed on my Kindle Monday, and I haven’t been able to get to it because I was working on the trilogy. However, if I get my act together, I should be handing over the hard copy edits to Bob this weekend, which means I can even start with the first two books and then go on to the finale. So that’s my plan. I did manage to start working my way through the Watch books again because I’ve read those so many times I can read four or five pages as a break and then put it down and go back to work. I’m up to Jingo, and enjoying it a lot. Well, it’s Pratchett. Of course I’m enjoying it.

What did you enjoy reading this week?.

So Bob and I have this system where we date each draft, and then when we rewrite, we change the date on the draft. Except somewhere here toward the end, both of us tired and trying to work on three books at once, something went Very Wrong, and I edited an old draft instead of his latest in which he’d made major changes. Which means we ended up with diverging drafts. I would go into more detail, but I’ll just end up screaming.

But we are much, much closer to the end now, just a few thousand words and a few thousand brain cells dying from how fast we did this. All of which is to say, I’m sorry I haven’t been very present but we really, really, really want to get these books done. We’re running out of sunshine here, and sooner or later that window is going to close.

Having whined all of that at you, enough about me. What did you work on this week?

There’s a diner in the book so I am forced to have lunch out. 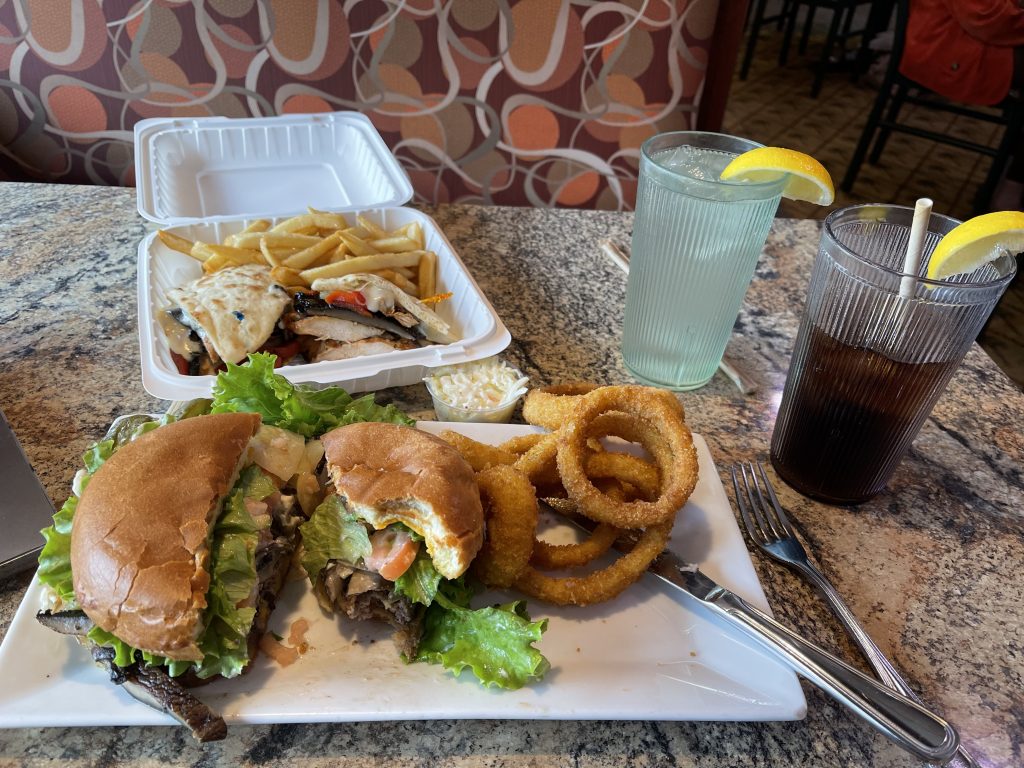 The things I must do for my art.

As much as I love those amazing late summer days when the temperature is no temperature at all, there’s something about early fall when you need maybe a sweater in the day and a good blanket at night. Those times when you close the curtains against the chill, turn on a lamp, pull a fuzzy throw across your lap, and pick up a good book. Cosy reading. Outside, the owls hoot and the raccoons yell, and inside you’ve got a book and a lamp and a blanket and–if you’re a hedonist–a cup of hot chocolate and a flickering fireplace. A cup of tea is also good. It’s Goodnight, Moon for grownups, basically. That makes me incredibly happy.

How were you warmed by happiness this week?

My computer cord went on the fritz, so I had to stop writing and read something on the iPad. Call Me Maybe, by Cara Bastone was a lot of fun, and made me think of a texting romance that is somewhere on my Kindle except I can’t remember the title. I think there were goats? Rabbits? No, goats. Anyway, the whole phone call/texting thing is a great deal of fun, and it also takes out all that annoying he/she/they-were-really-hot stuff that has to be in there when people see each other. (I must have typed “great ass” about a million times across three books this year.).

So what did you read this week? And great asses?

Guess what I’m working on. Yes, I know you’re tired of hearing about. Imagine how tired I must be of writing it. Bob and I are both babbling at this point. He’s finishing up his part of Vermillion, and I’m ripping a major subplot out of Pink and writing a new major subplot in. Argh.

Tell me about something wonderful and fun and exciting and colorful you did this week. Or, you know, just what you did.

You know what the best thing about those screen shots of our conversations is?
I don’t have to write a post. 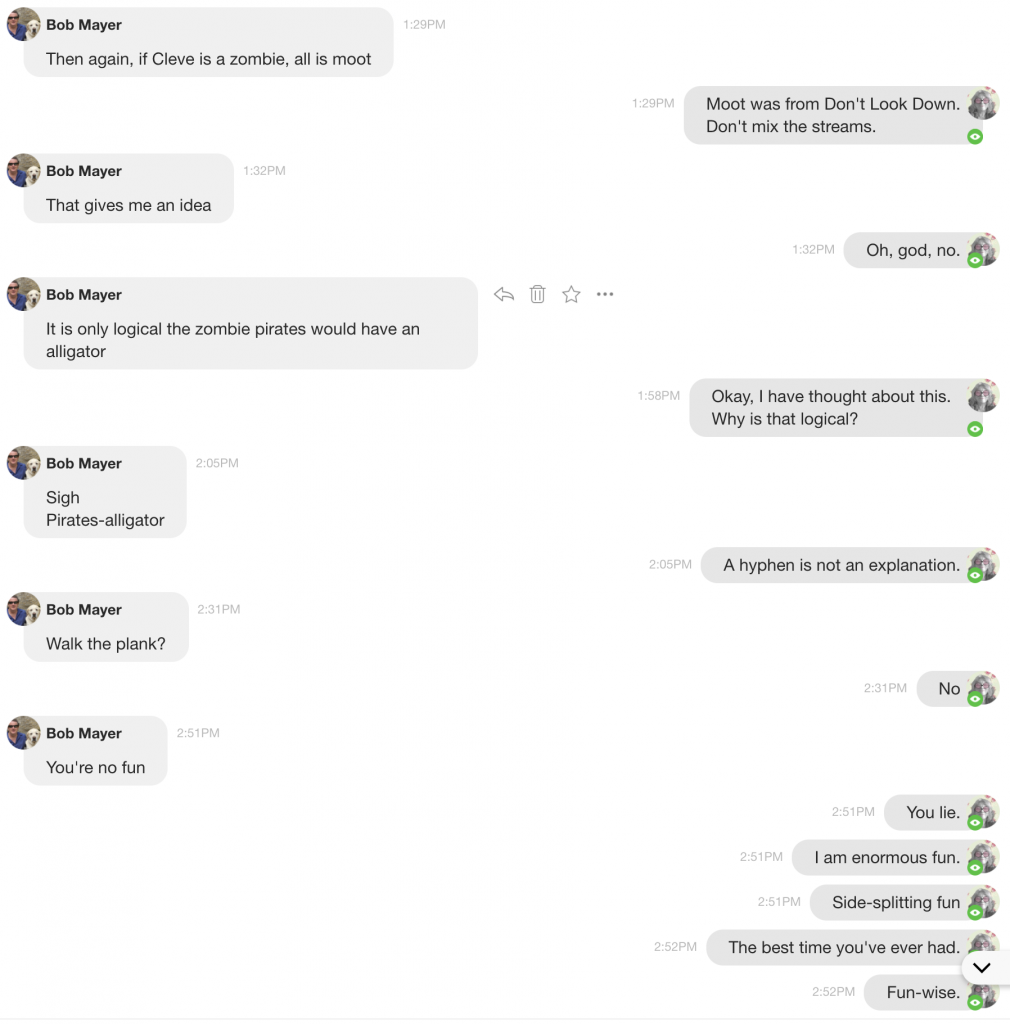 And then he goes back and says serious stuff about the book. Thank god he can plot.